Da Michele, the biggest name in Neapolitan pizzas, has opened a restaurant in Berlin.

My stance on pizzas is polarising. A huge pizza fan, I’m equally at home munching on a Penny frozen pizza than delicately devouring one from a high-end restaurant. I’ve paid top-dollar for disappointment as many times as I’ve given loose change for a champion. Sometimes a Pizza Dach pizza really IS as good as a Futura, and who are you to tell me what is and what isn’t a real pizza, anyway?

But then there are times when you actually enjoy being proven wrong. This happened very recently when I was invited to eat at new Schöneberg pizzeria, Da Michele, in the run-up to True Italian Pizza Week.

What is True Italian Pizza Week?

Between 15th-21st October, pizza fans get a free pass to celebrate the mighty pizza in all its glory. 30 of Berlin’s finest pizzerias are serving up special-edition pizzas, along with an Aperol Spritz for just €12. Find out more here.

Anyway, where were we?

Da Michele – or ‘L’antica pizzeria da Michele’ to use its full name – is one of Naples’ most famous pizza restaurants and one that’s been defining what a Neapolitan pizza is since 1870. It’s also, in true Italian style, a family-run business.

With outposts in such locations as Dubai, Barcelona and London, it’s only natural that Berlin would be next. And their new location is in a particularly charming area of Berlin. West Schöneberg – just off Dominicusstrasse – the seedy side of what is a rapidly-changing Kiez that looks the same as it did in the ‘80s. 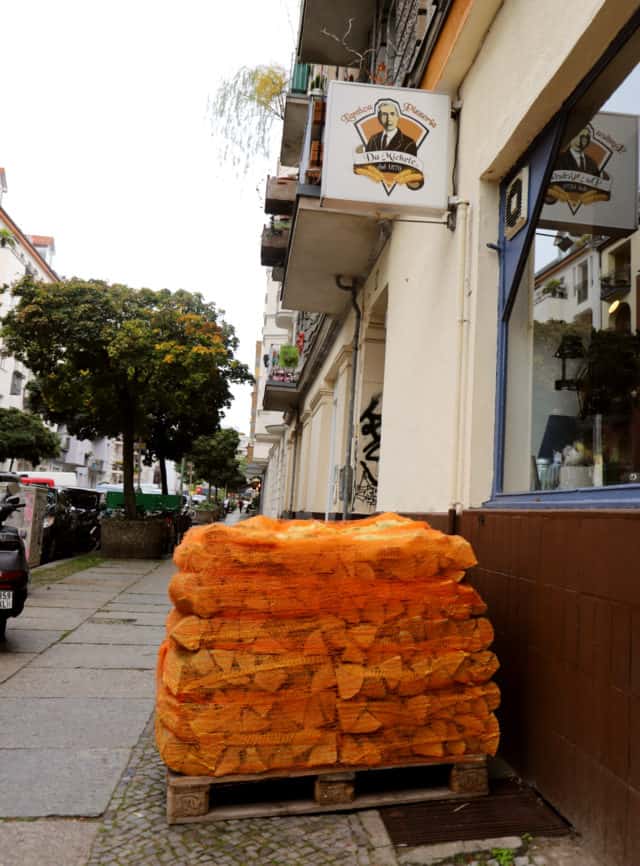 Roberta, manager of Da Michele, greets fellow BLY writer Sarah and me at the door. The restaurant is just setting up for the evening, and a huge delivery of logs has arrived for their wood-fired pizza oven. We’re welcomed into the bright, blue interior of the restaurant, which has an almost seafood restaurant feel to it. 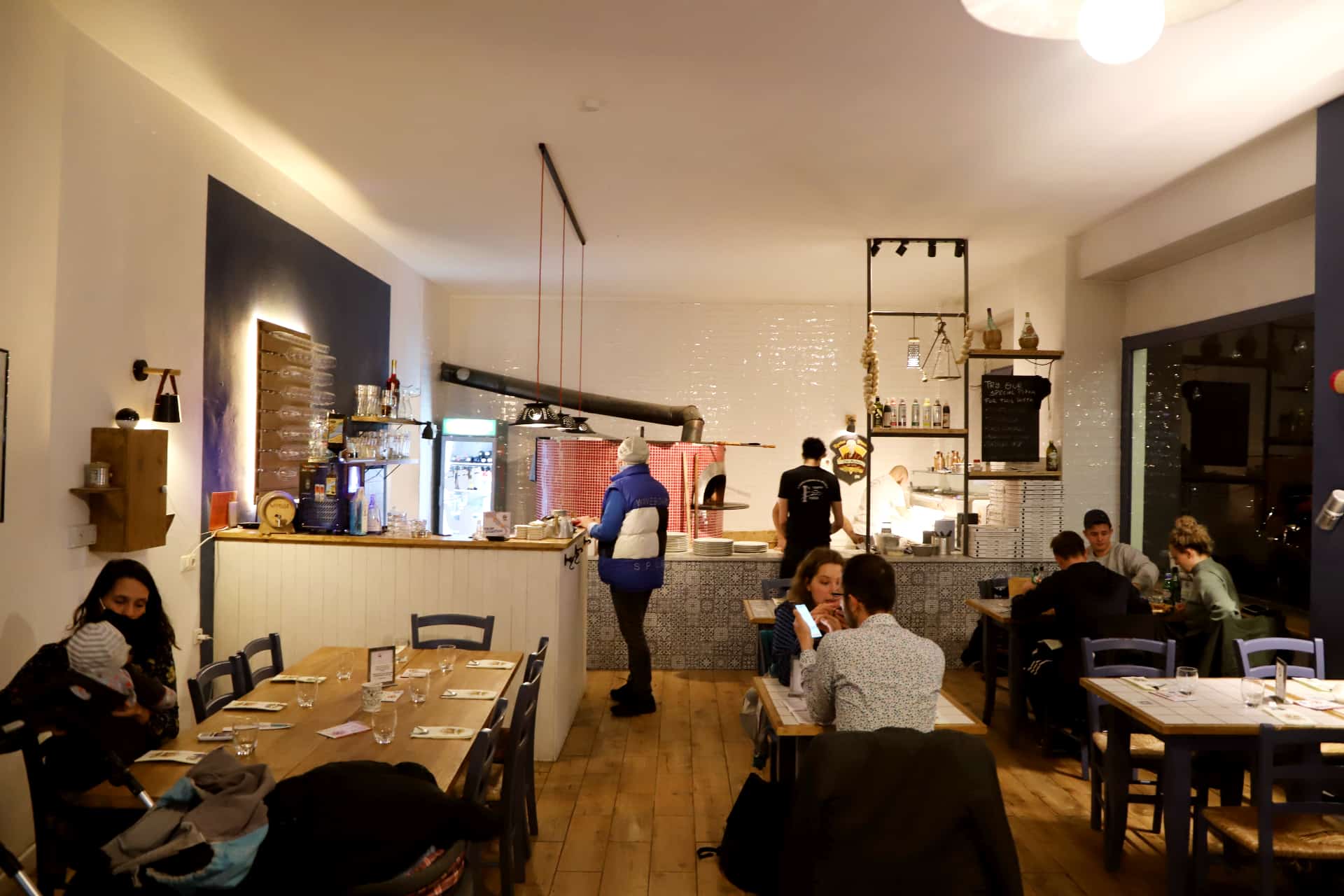 Tonight, we’re sampling the two pizzas Da Michele are offering for True Italian Pizza Week. This is perfect – choice is my enemy and I’m very happy to be told what to eat. 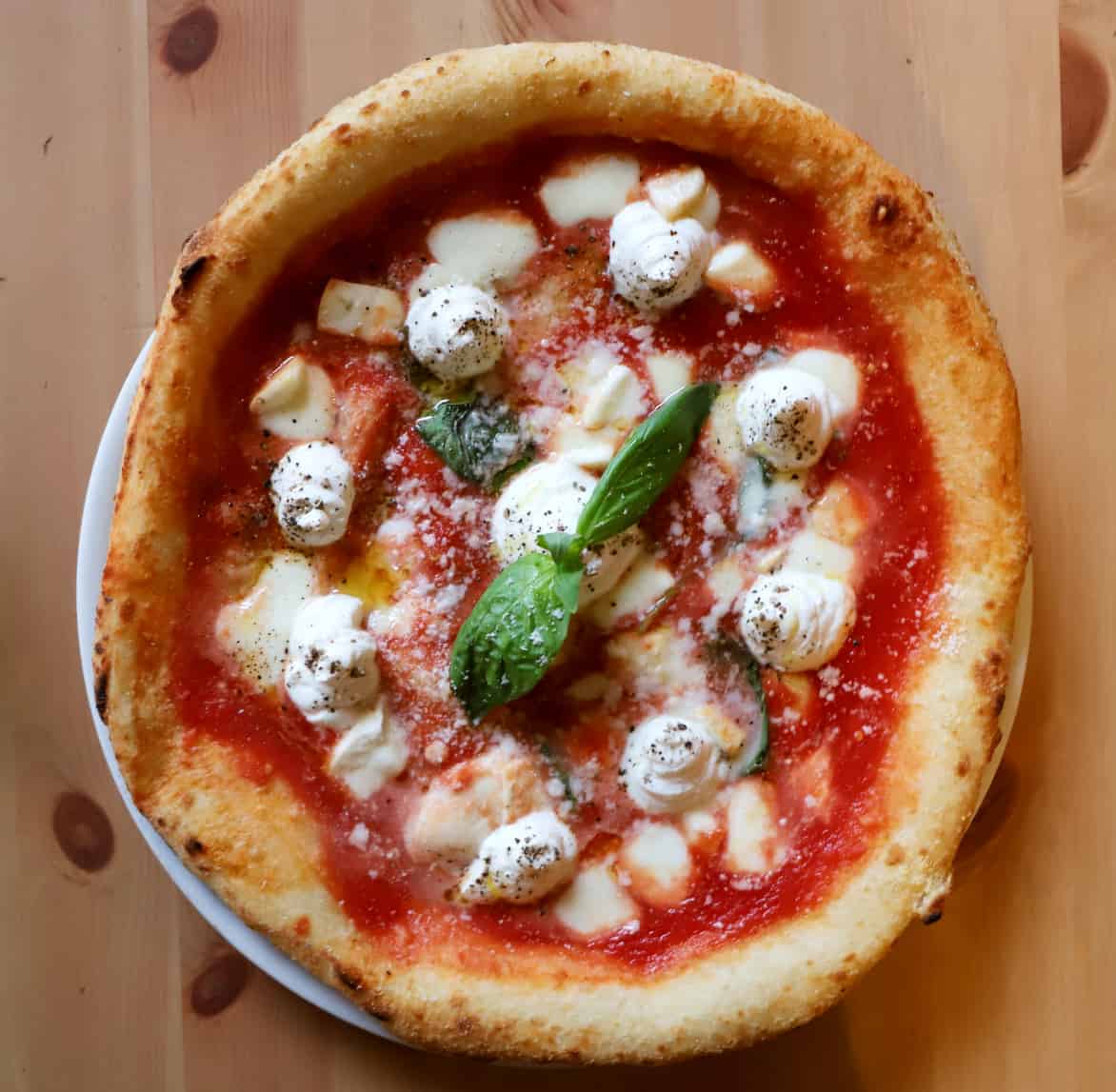 On the menu is a fried pizza with mozzarella, cicoli, raw ricotta flakes, pecorino and basil, and Pizza Ortolana with fried aubergines, peppers and friarielli, which can be easily made vegan.

The fried pizza arrives first and Roberta informs us that Da Michele’s ‘secret’ to a good tomato sauce is to not add any salt, because the fried pizza base – dunked in oil before a quick trip to the oven – is salty enough already. 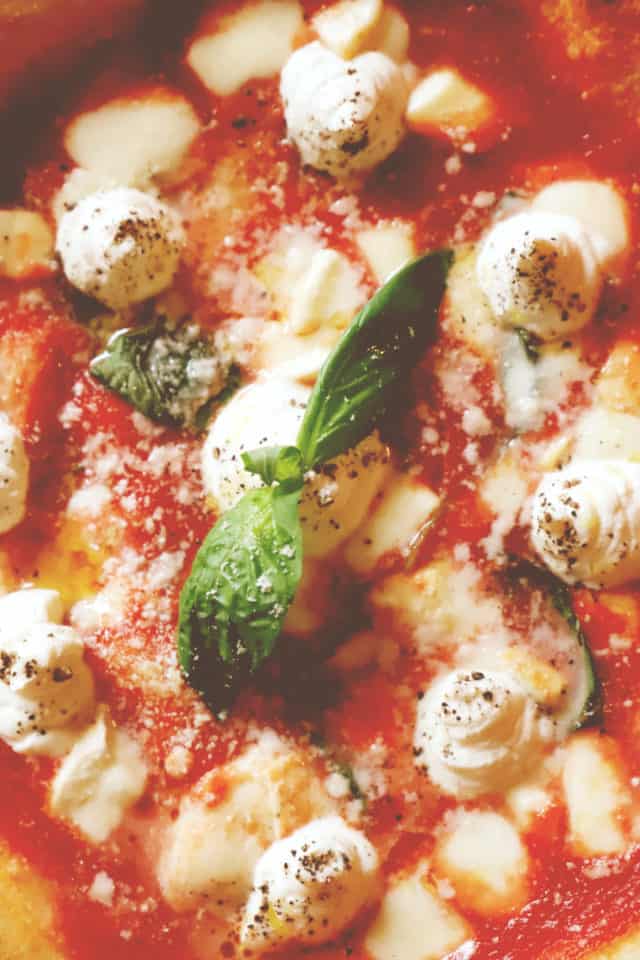 The fried pizza is really damn good. The fried base really works in that satisfyingly-greasy way, but it’s the toppings that really impress. The mozzarella is a particular star – endlessly creamy and flavourful, putting my Lidl mozzarella to shame. “This is where many pizza restaurants slip up”, Roberta tells us. You can make a great pizza base, stick on some nice ingredients and cook it to perfection but, if you skimp on the mozzarella, you’re done for. 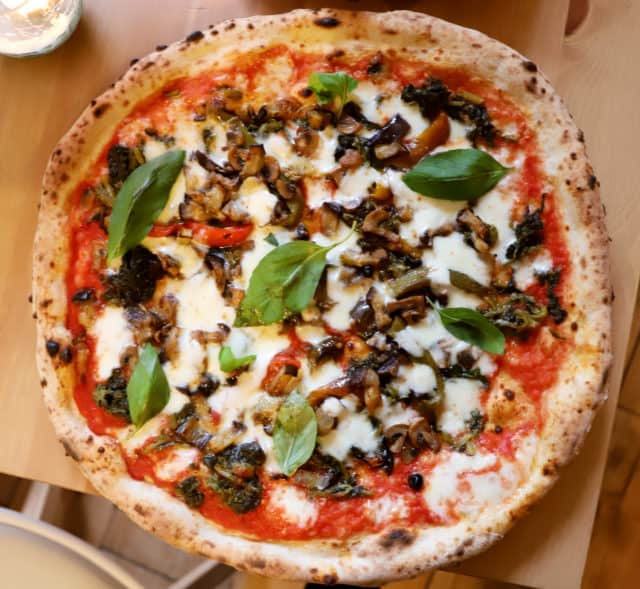 The Pizza Ortolana arrives too big for its plate. Huge. This had a powerful effect on Sarah and I. Believing that Neapolitan pizzas are to be consumed messily, we dig in with both hands.

My issue with Neapolitan pizzas is that they’re often too soft, wet and flimsy. Things get messy and toppings end up everywhere but on your pizza. It’s frustrating, and I’m often left thinking ‘my Lidl pizza would never do this to me’. 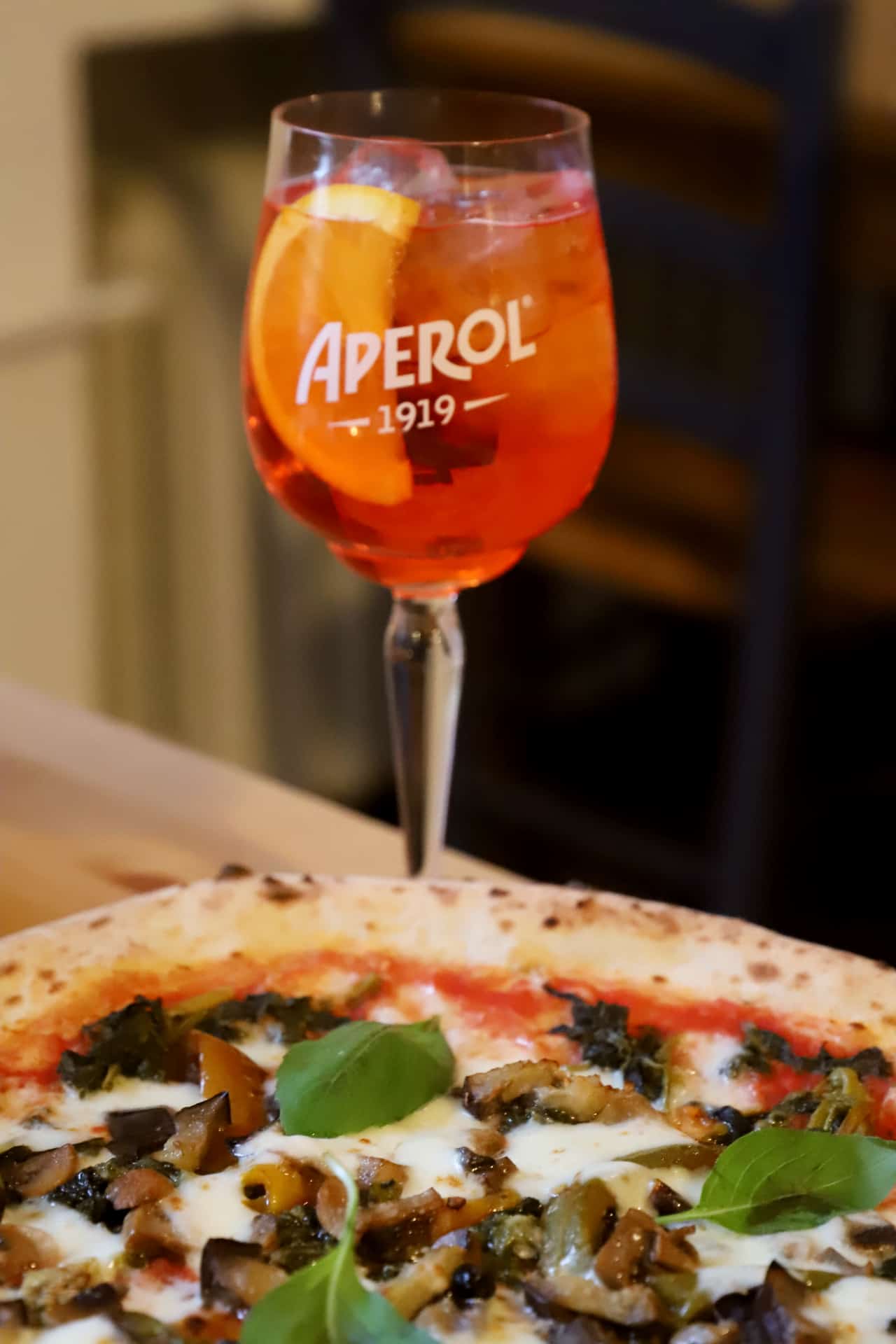 The Ortolana is different, though. Roberta says Da Michele’s pizza bases use fewer ingredients than your average Neapolitan base. Some oven alchemy is going on, and the base remains firm, rigid, delicious. Again, the ingredients on the Ortolana impress and once again I’m reminded that ‘good’ food is something to value.

Upholding the standards of Naples in Berlin

Roberta goes to great lengths to import all of Da Michele’s ingredients from Naples, even though this often comes with logistical problems. Being only eight months old, this Da Michele is still adapting to its new environment – learning which toppings Berliners favour and which ingredients will often sell out.

They are slightly bending the rules for Da Michele Berlin – their menu offers 16 pizzas, not four like the original restaurant. That being said, they are proud of maintaining their Italian standards, and Roberta and her team won’t be fully adapting their menu to Berliner tastes. Want a tuna pizza? Pineapple your thing? Walk on, friend.

Despite little opportunity to build a real vibe in the restaurant during a pandemic, she’s already noticing how Berliners have taken to Da Michele. “Da Michele works in Berlin better than its London and Barcelona counterparts”, says Roberta, “there’s more of a community feel here. People like to hang around, sip a Limoncello and shoot the breeze.” 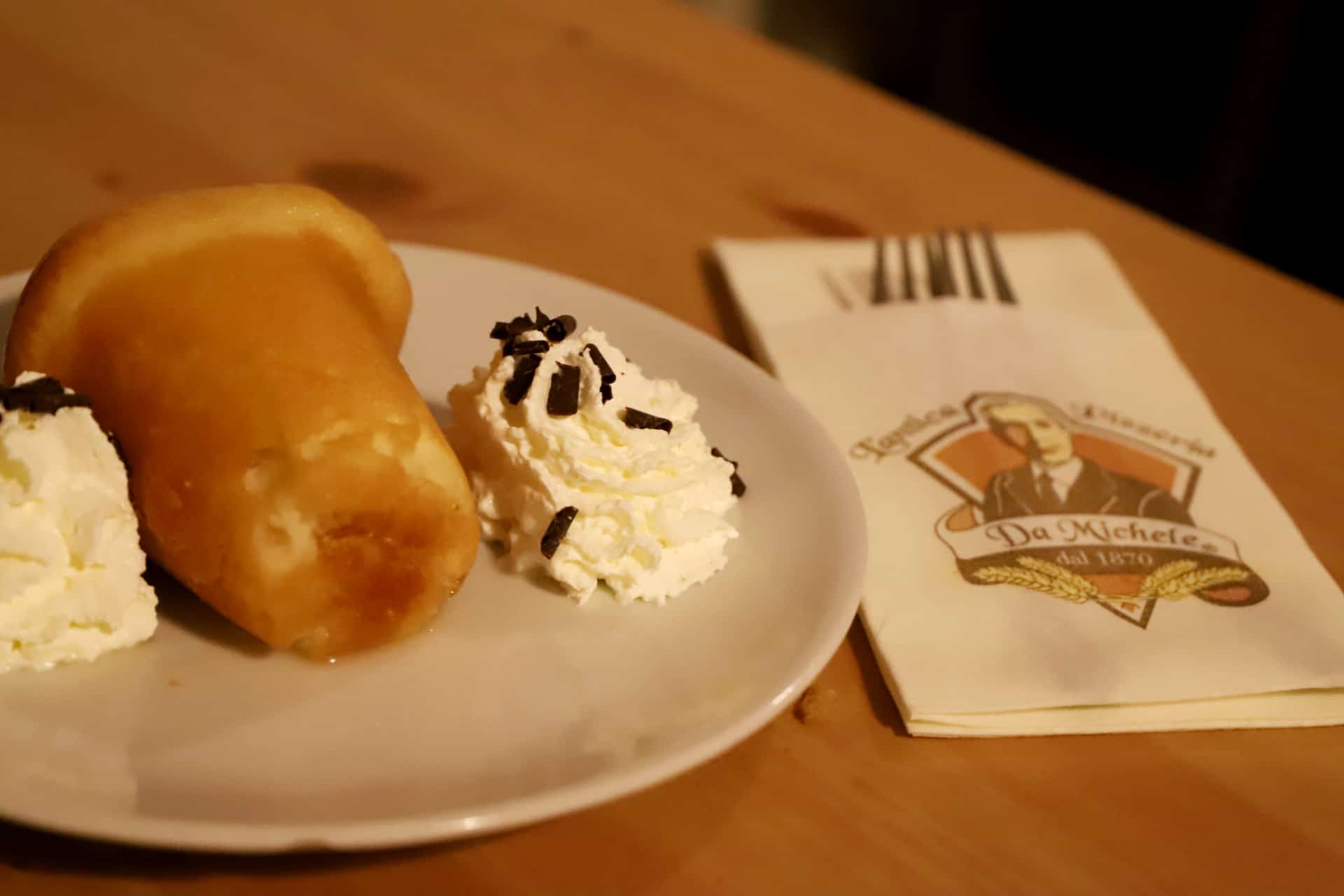 Stuffed, but in the mood for the full Naples experience, Sarah and I share a ‘rum Baba’. It’s a rum-drenched hunk of fried dough, served with a dash of whipped cream. It’s a great, boozy end to the evening – this is how Italians must feel every night, right?

It could be that not all pizzas are born equal – and those which fly out of Da Michele’s wood-fired oven are of a truly different class. 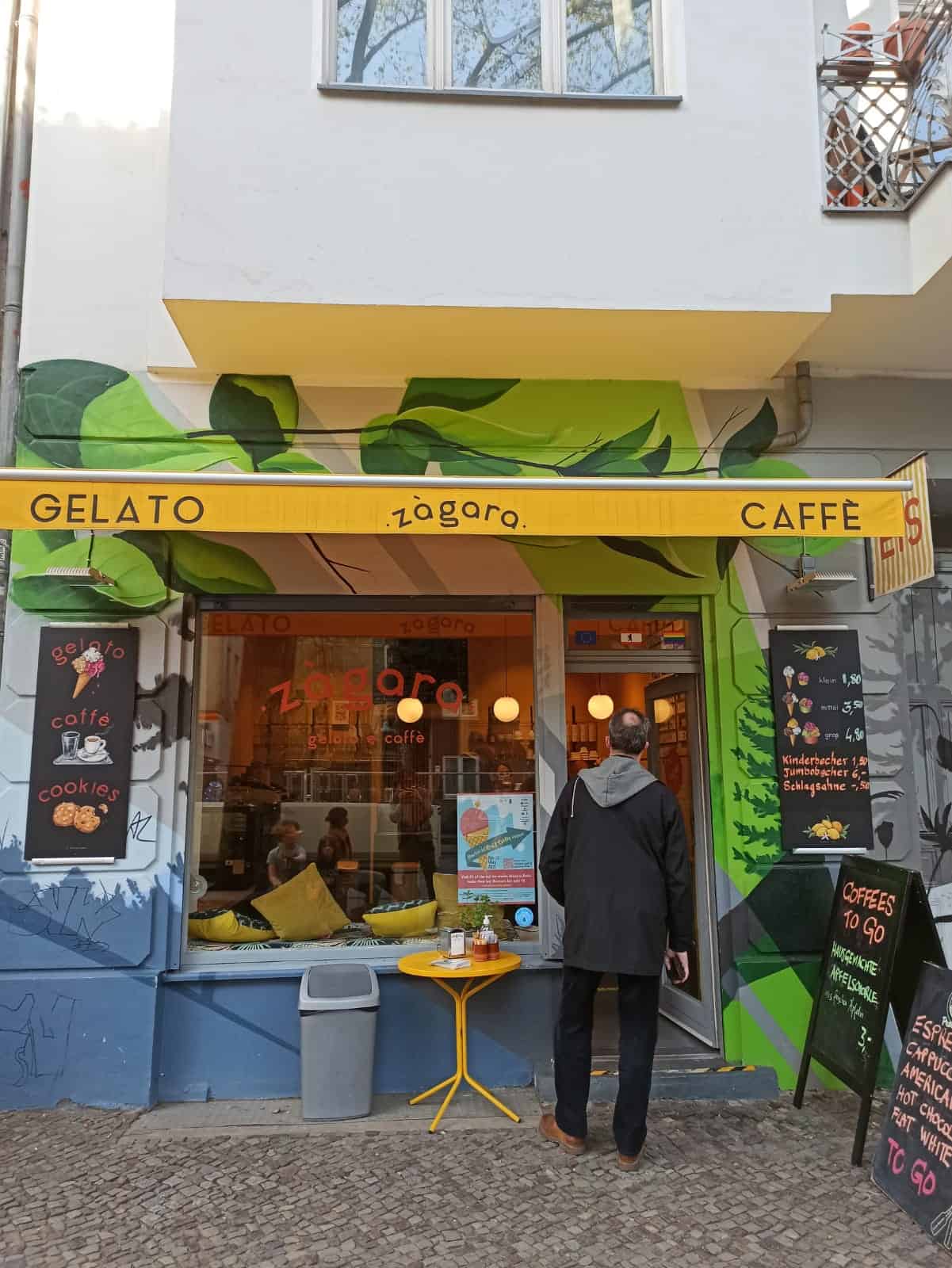 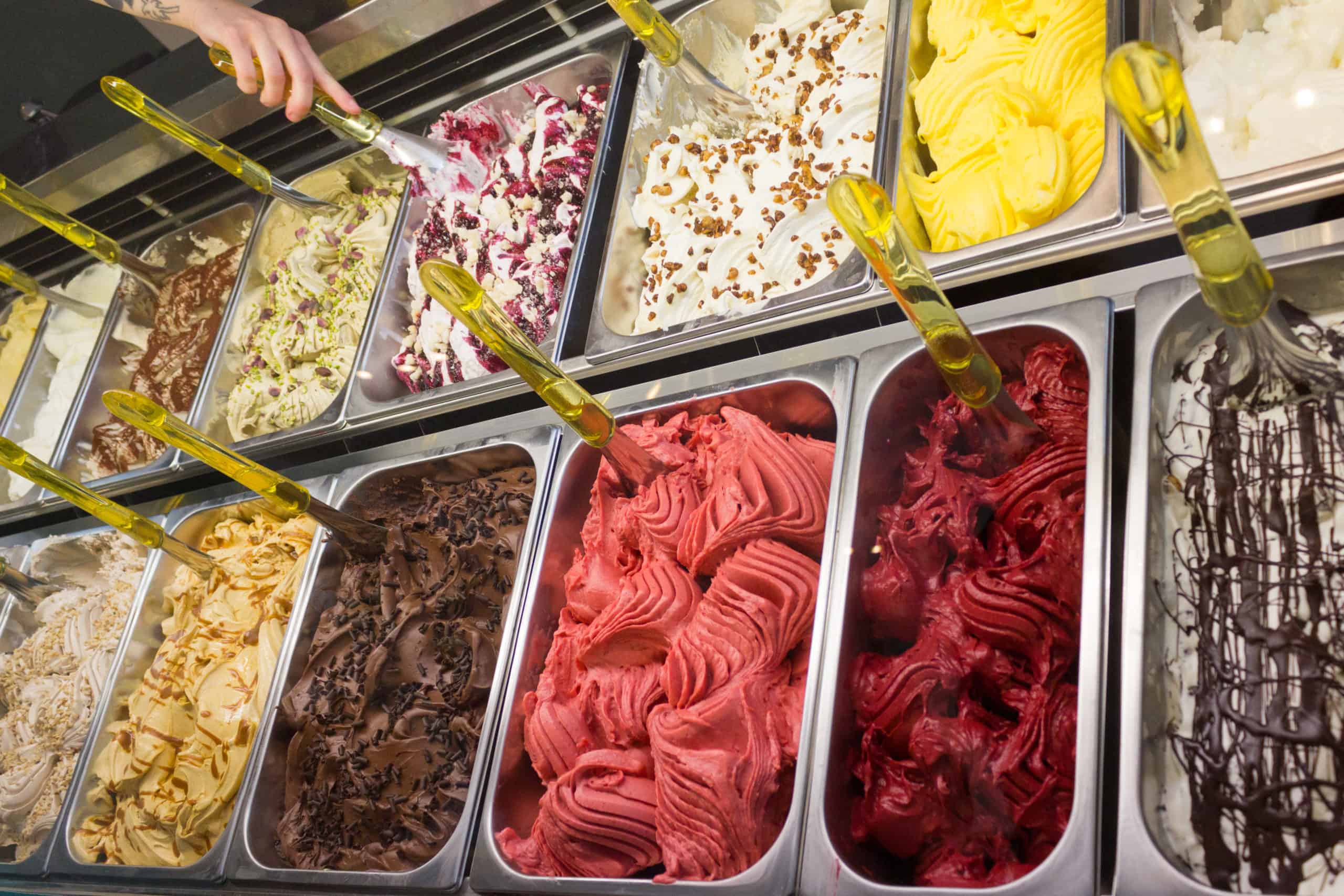 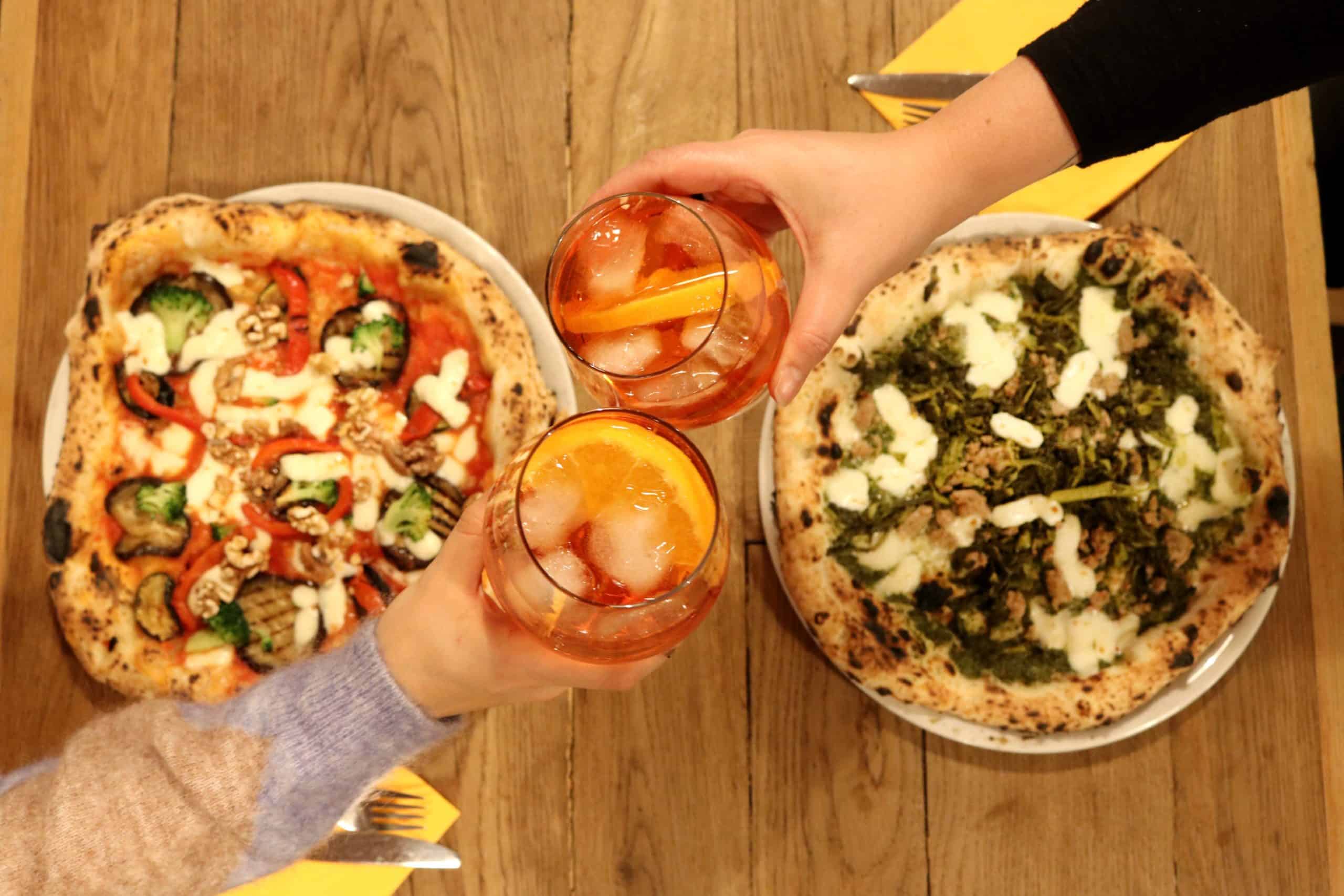 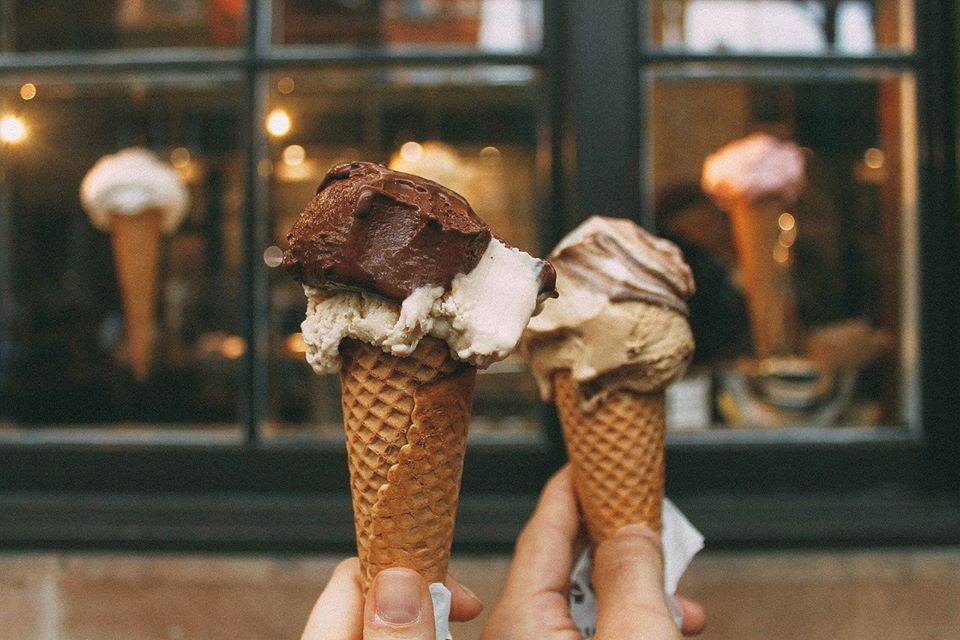