We went to try TwinPigs’ new nose-to-tail menu, but our meeting got off to an unexpected start.

“I accidentally burnt his nightclub down”, TwinPigs owner Pär says whilst explaining how he and Robin, a fellow BLYer who’s joining me on this review, know each other. What follows is an anecdote to beat them all.

It starts with Robin, a young man working his first job as bar manager of a busy nightclub boat in Gothenburg, Sweden. Smelling smoke, he leaves the bar to investigate, soon discovering that a raging inferno has already consumed the lower three decks of the ship. Panicking, he tries to convince the party people to leave. In response, they say “No way, I only just bought this drink!” and keep dancing. It takes Gothenburg’s fire brigade clearing a 1km perimeter around the nightclub before the revellers finally begin to leave. Repairs on the club take six months. Skip forward 10 years. It’s Wilde Renate and Robin’s talking to a Swedish man who tells a story of flicking a cigarette butt whilst in a nightclub boat in Gothenburg. The cig butt falls down a hole in the decking into a bundle of dry leaves decks below, that then catches fire.

On with the food review

TwinPigs was one of the names I frequently heard mentioned during those early ‘don’t you know Neukölln’s so cool’ hipster takeover days a few years ago. And it’s never lost its hipster credentials – artsy crowd, curated DJ bookings, cocktails with funky names, dim lights and daft haircuts. 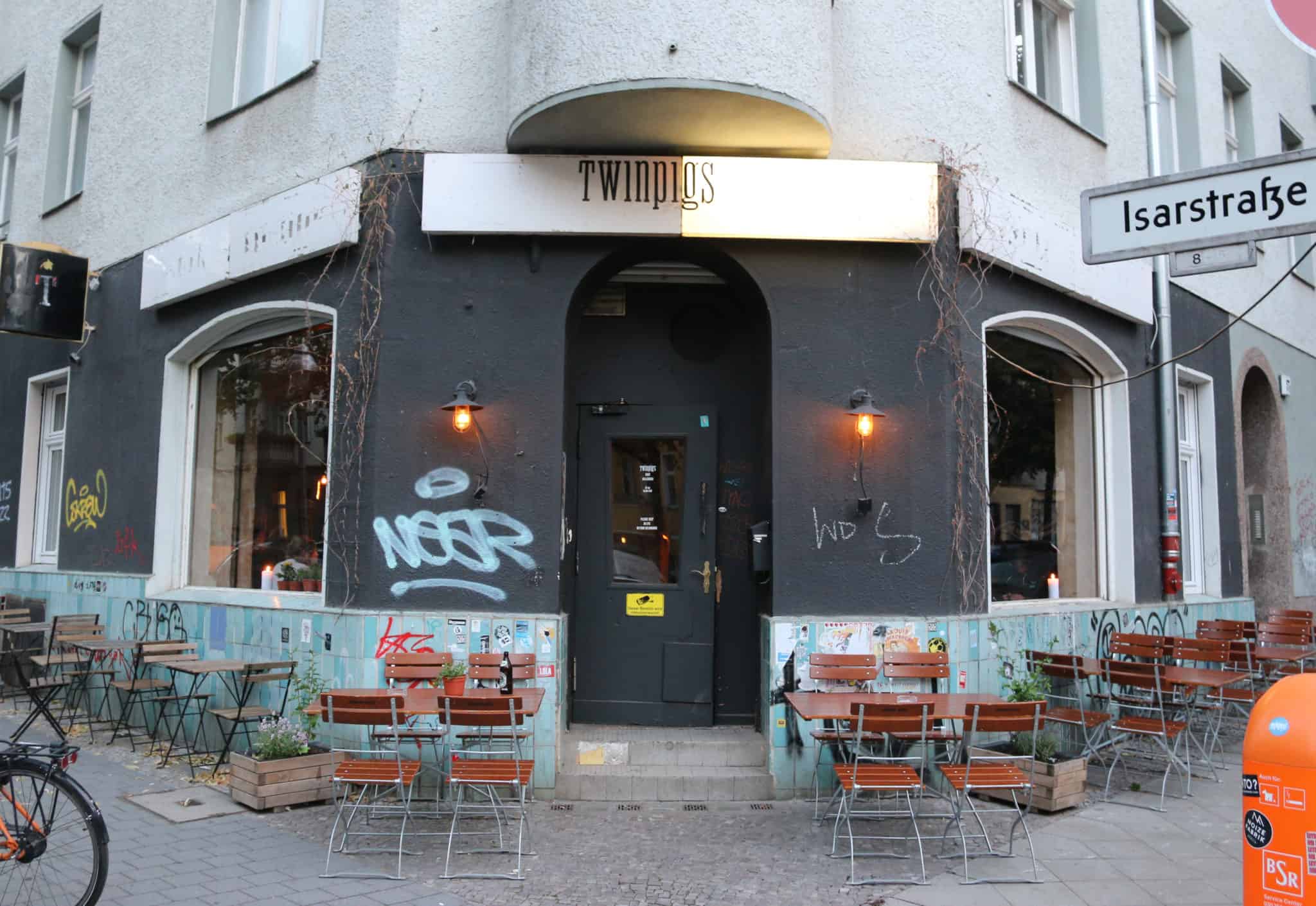 But whilst I’ve been there a few times over the years, I’ve never got that air of hipsteria from the place. In fact, I think TwinPigs is too honest to be truly hip – and their new nose-to-tail concept demonstrates exactly why.

Nose-to-tail – the concept of not wasting any edible part of the animal – certainly does smack of hipsterdom. And if TwinPigs had served me a braised ox-cheek whatever, I would have thrown them into that bin. But when their weekly special appeared from the kitchen – deep-fried sheep’s brain – all pop-up art galleries within a 4km radius instantly closed down. Because Pär and chef Pablo Moscoso aren’t doing it to be cool, they’re doing it because this is what they grew up eating.

Pär himself is from very northern Sweden, where things get cold (and a little weird). Eating a soup made from Reindeer blood, heart, insides, bollocks, shit, fuck, whatever was a totally normal experience for him when growing up. And recently, Pär and Pablo went on a cooking adventure where they joined a tribe from Northern Sweden to learn their culinary traditions.

This experience led them to create a tongue tostada dish, which really kicked off their nose-to-tail concept.

Whilst fried brain IS a little mental (pun intended), most of TwinPigs’ new menu remains within the wonderful realms of good bar food. 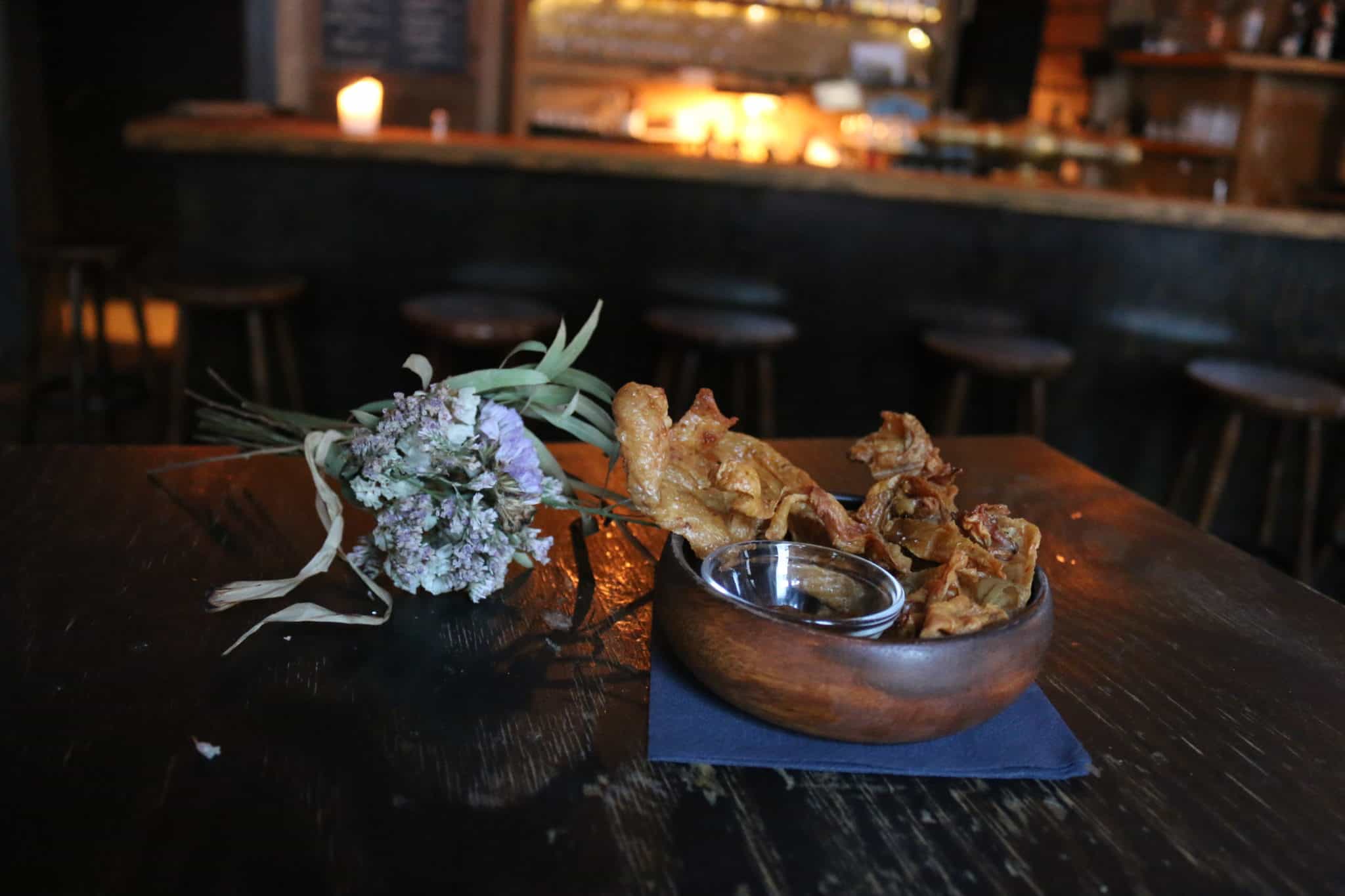 And their tongue tostadas… tongue’s not too crazy these days. It’s accepted. Enough of us know that it’s deliciously tender and with a delicate flavour. Paired with horseradish mayo and caramelised onions, the brittle crunch of the tostada works brilliantly against the rich tongue meat.

But it’s their bi-weekly specials where their nose-to-tail menu goes one step beyond. That’s when we enter into sheep brain territory.

I asked Pär what specials they had done so far and he listed them off in chronological order: pork belly (not weird), blood wurst (still okay), cow tongue (fine, I guess), ox heart (a bit odd) and lamb brains (Michael Jackson, that’s strange). You can see the trajectory their menu is taking and I have no idea what will be next? Chicken wattle surprise? Cow arse?

I say bi-weekly specials because every other week they run a vegetarian or vegan special. You can get the weekly specials in your choice of either a delightful crusty bread bap or as a tostada atop a fried tortilla. I would always choose the sandwich option though because, to me, all corny tortilla things taste like grandpa’s ashes compressed into a groan of a cracker – but that’s just me!

Beer, bar snacks and a cocktail or two

On top of the nose-to-tail stuff, TwinPigs offers a neat menu of meat and veggie options. Their most popular dish is The TwinPigs pulled-pork sandwich, and rightly so. 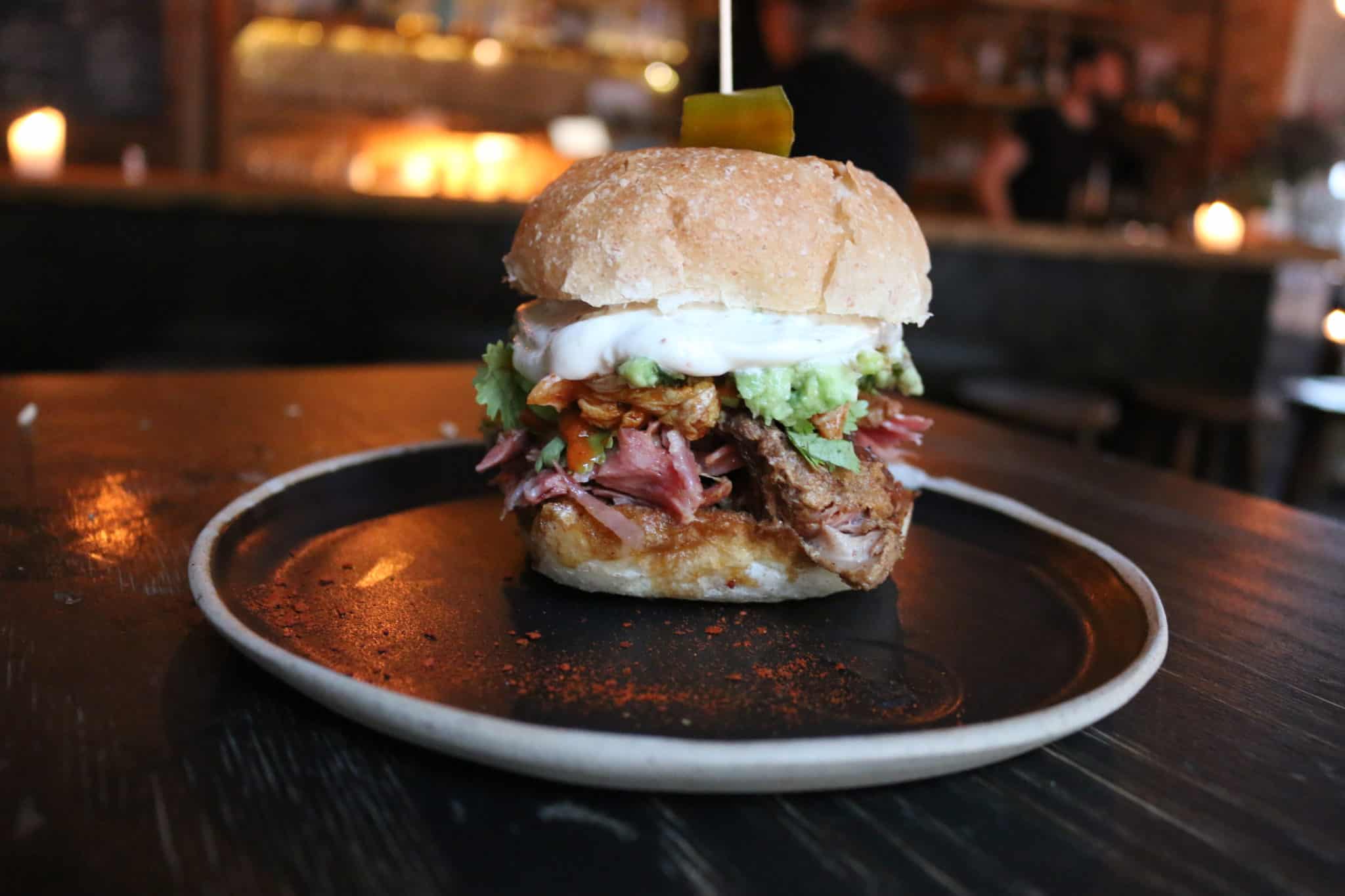 Served with pulled pork, home-made mayo, avocado, chipotle kimchi and coriander leaves, it might sound like a hipster’s beauty regime, but don’t be fooled – TwinPigs has a wonderful way of mixing flavours and styles in a balanced way that doesn’t take away from the core ingredients.

And their ‘pulled-pork’ is less the stringy-dogfood-on-a-plate that has invaded our shores in the last few years, and more chunks of brined and smoky pork knuckle, more reminiscent of a good eisbein or ham hock, and not covered in a sickly-sweet sauce. 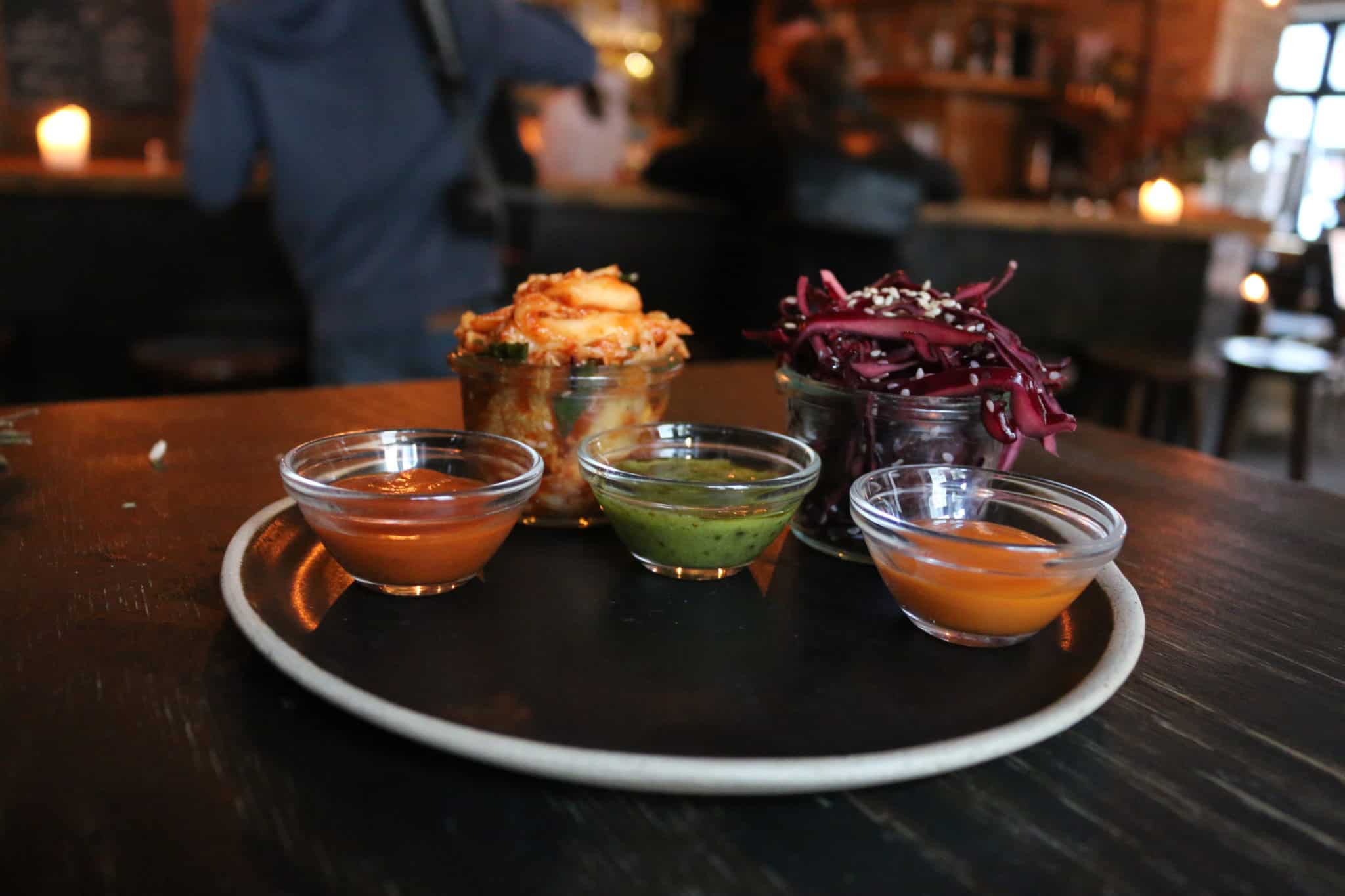 And, like all meals on their menu, the toppings and sauces compliment each other perfectly.

A sucker for cream/coffee cocktails, I also had a go on their Espresso Martini. It’s like a White Russian caught blood-doping, and gave me a hell of a caffeine high. 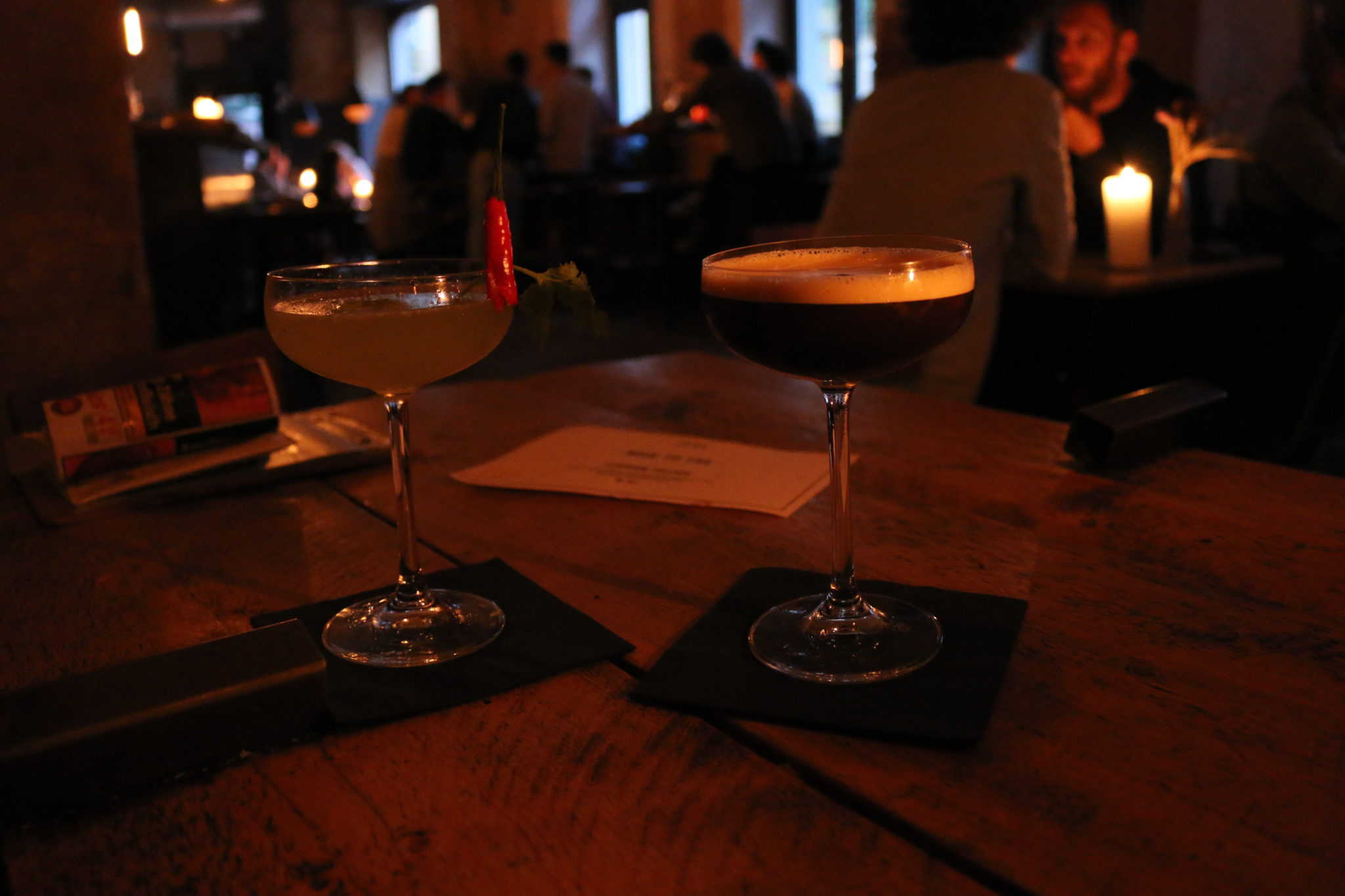 What does ‘TwinPigs’ actually mean?

More than once have I heard people mistake TwinPigs for that Twin Peaks-themed bar, The Black Lodge, on Sanderstrasse. I was always too sadistic to correct them (sorry, Pär), but it got me thinking: what the hell does TwinPigs mean?

“I’m really into word-play,” Pär explains. He tells me he intentionally picked a name which sticks in your head, where your brain skips over the syllables. The juxtaposition of images and sounds makes the name memorable. “You want to make people think.” And he’s probably right – I’ve never forgotten the name and I believe Pär when he tells me the bar’s popularity was gained through word-of-mouth.

So go to TwinPigs, eat weird food, try not to be too hip, and don’t burn it down. 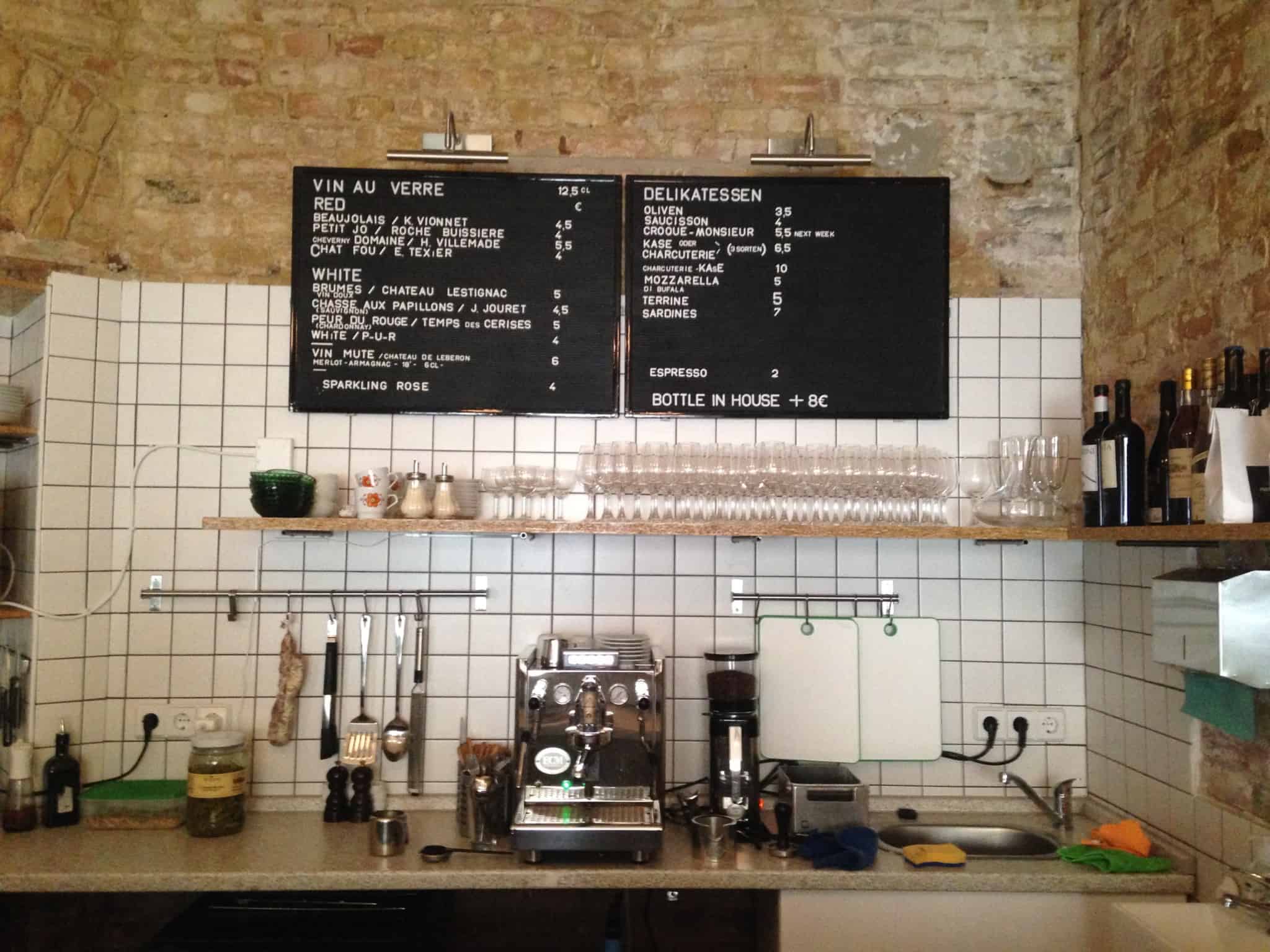 Back to the roots with natural wine at JAJA Berlin