My knowledge of South American cuisine consists of Argentine steaks with chimichurri, ceviche, pisco sour and caipirinha. Beyond that, I’ve no idea what people eat over there. So, when I heard that Kreuzberg restaurant Tupac was offering a modern take on Latino food as a whole, I was interested to discover something new. 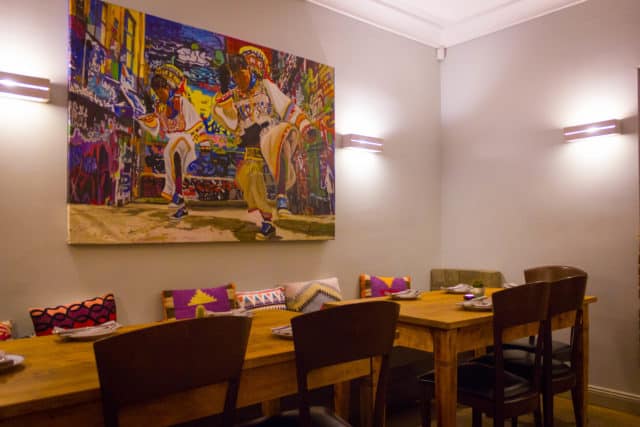 Open since March 2019, Tupac boasts a chef from the very top of the Peruvian food scene. Working for Lima’s Central Restaurante, a place consistently ranked among the top 10 restaurants in the world, he’s now set up shop in the blue-shirt-and-briefcase, after-work-bite end of Kreuzberg, Mehringdamm. 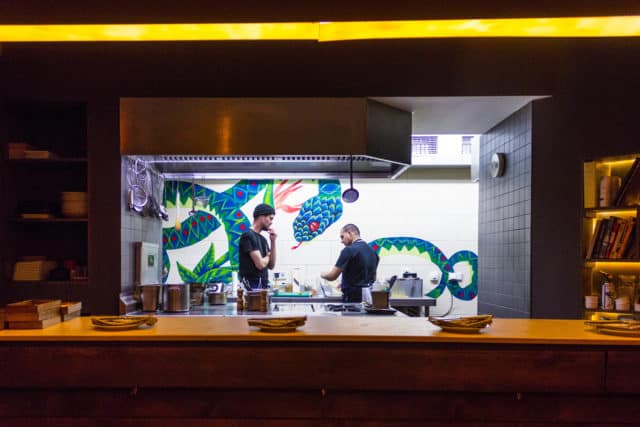 No, not Tupac Shakur.

Elephant in the room: No, this restaurant isn’t named after Tupac Shakur. It’s named after the guy Tupac Shakur was also named after: José Gabriel Túpac Amaru. Túpac Amaru II was an important figure in Peruvian history, leading an uprising against Spanish rule, and is seen as a mythical figure for indigenous Peruvian rights. He was killed in 1993 in a drive-by shooting, most probably by East Coast rappers.

As we are seated and given our menus, we’re informed that the dishes are meant for sharing. To get the full spectrum of flavours Tupac has to offer (and enough food to be satisfied), it’s suggested that three dishes for every two people is a good model to follow. 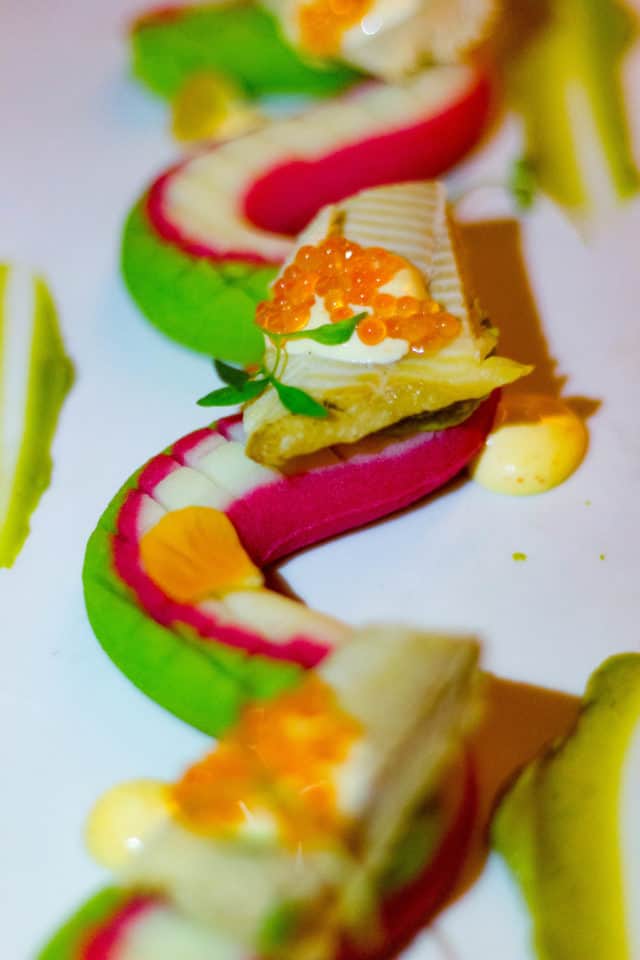 Sharing dishes cost between 8-16.50EUR, with bread served with butter, olives and a mean tapenade costing 3EUR and desserts at 5EUR. When we were there, the menu served four vegetable dishes, four meat and three fish.

As the dishes started to arrive from the kitchen, it became clear that Tupac has a thing with presentation. Brightly coloured plates, a seaside scene with beach pebbles and shells, food served in earthenware pots and cast-iron skillets. 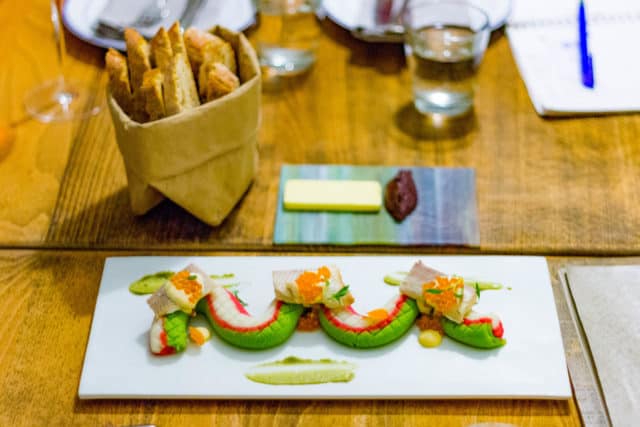 Our first course was a technicolour potato snake of a dish, mashed marinated potatoes with smoked trout, salmon caviar and avocado cream.

Bright, almost luminescent, yet oddly served cold, the mashed potato was a bit of a brain-fuck to begin with. But, as the heavy roasted garlic flavours came into play, enhanced by the avocado cream, it started to make more sense. The meaty trout’s tougher texture and robust flavour interplayed well with the smooth puree, whilst the salmon caviar… well, it’s nice to feel rich sometimes.

Next, we were transported to a seaside-scene with scallops in smoked jalapeño and coriander sauce with toasted corn tortillas. 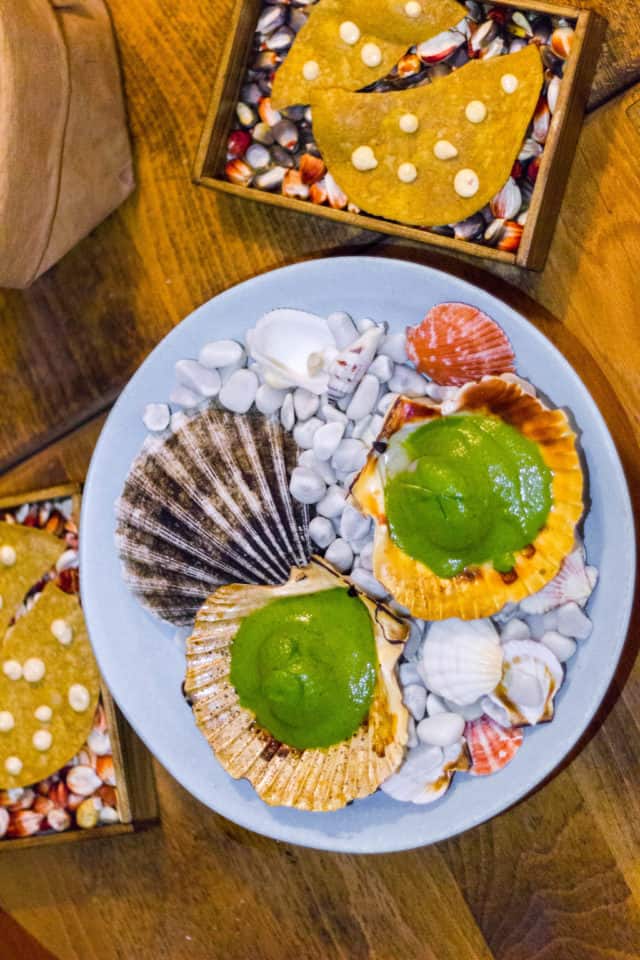 I’m no big-spender gourmet, thus haven’t much experience with scallops. I’d never understood their allure or price tag. But wow, these certainly taught me why they’re so regarded. Incredibly sweet and tender, luxurious, like biting through milk or lychees.

This dish was excellent – where the sweetness of the scallop was still present even through the bright bite of that sauce. The tortillas added an excellent dry crunch contrast, and we mopped up every last drop of sauce.

The seaside visit continued with the ubiquitous ceviche. The dish is raw seabass, radish and habanero ‘tiger milk’ (the citrus-based sauce used to marinate and cure the fish). 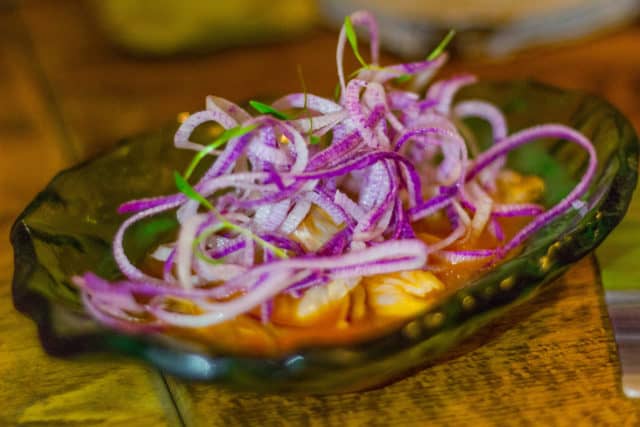 Considering this is Peru’s national dish, we had high hopes. Whilst the dish was light and refreshing and the flavours good, the taste of the fish was somewhat lost beneath its hot, tangy sauce – the poor seabass was relegated to a purely textural feature. 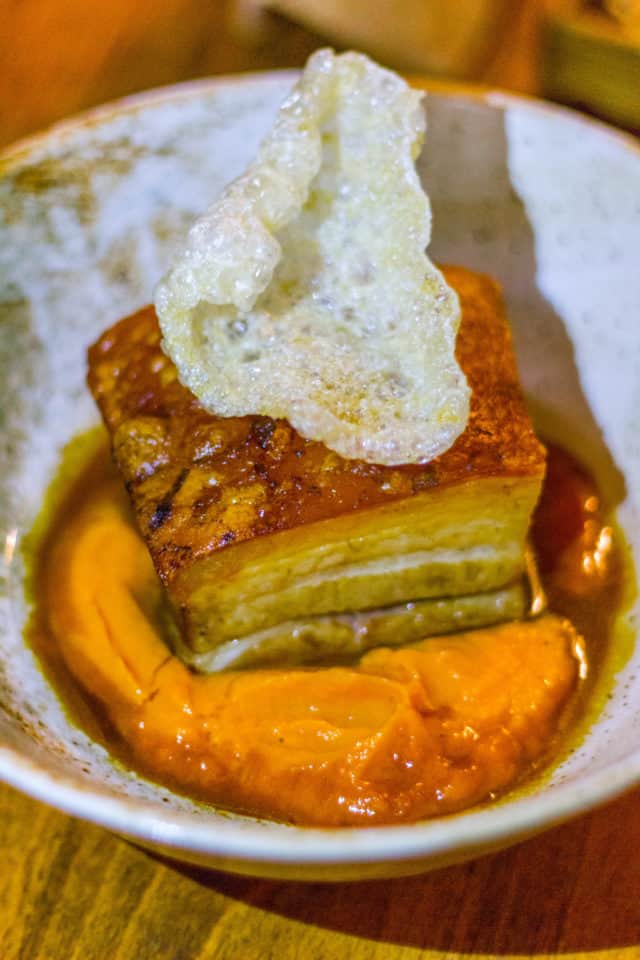 This dish was a winner – the meat incredibly tender and flavourful, the sauce excellently rich, the velvety sweet potato melting into it all. The crispy pork belly could have been crispier, but I guess the pork rind made up for some of that.

This dish reminded me of home in the UK and provided my first indication that South American food wasn’t all spice and colour. In fact, it could be rather… European. 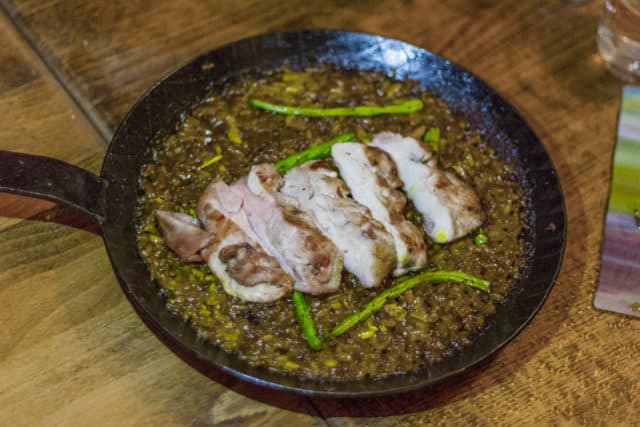 My first impression: was this chicken? I’ve cooked rabbit before – scrawny little devils – and I’ve never seen so much meat on one before. They’re from Brandenburg, apparently, big as hounds. Thanks, Chernobyl.

This was a dish I really enjoyed. The rice, congealed and burnt to the pan, mined that European blandness, that brown nothingness of rich, savoury, unctuous monotony that turns delicious, moreish, bite after bite.

The rabbit served as a counterpoint: fresh, juicy, alive. I won’t lie, it tasted 85% like grilled chicken breast – but that extra 15% of bunny gaminess really made it worthwhile.

Between the mashed potatoes and roast pork, this culinary tour around South America had been very different from what I’d imagined.

Perhaps I’d expected fireworks of flavour, ingredients I’d never before discovered, chillies hotter than the sun. But, the flavours at Tupac are all very well balanced, subtle, tempered. The meat is rich, the fish dishes play off fish’s inherent sweetness, no ingredients or flavours dominate the plates.

It’s fine cooking indeed, and there are some excellent techniques on display from a talented chef. By the end, I was half-happy to find out that those people so far away over there… well, they don’t eat so differently from us.

But then again, Tupac’s Pisco Sour was understandably incredible. Chilli-infused for a month, I’d’ve been heavily disappointed if it wasn’t.

It’s a personal gripe, but all restaurants seem to claim to be sharing places now. Thing is, very few actually work as sharing places (and it seems like some attempt to just make people buy more plates). In Tupac’s case, some of the dishes did not divide well – the scallops, the pork for example (we were 4 people). With some of these dishes, it’d be better to order one as a main and take a smaller dish as a side. Fuck sharing. 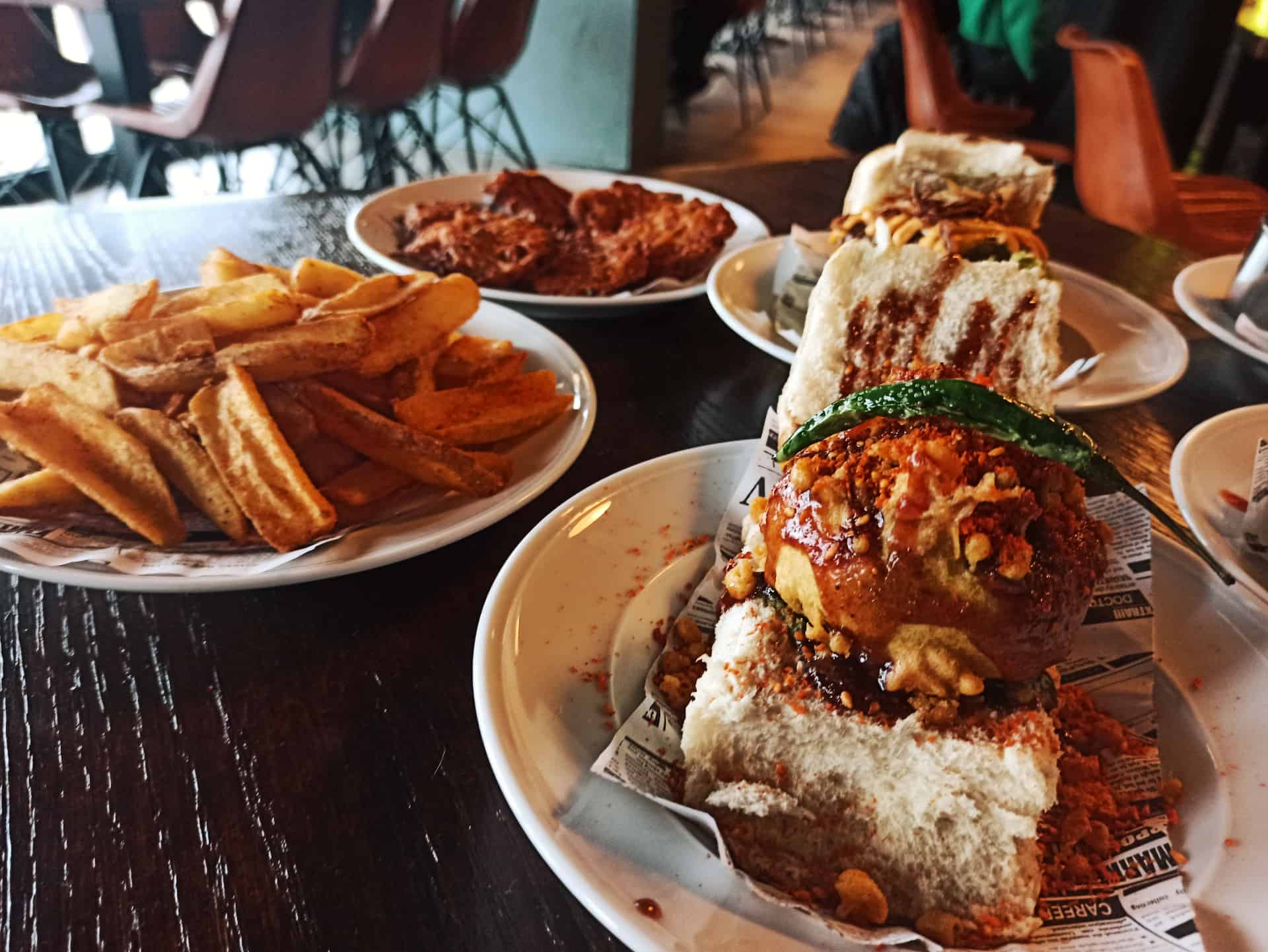 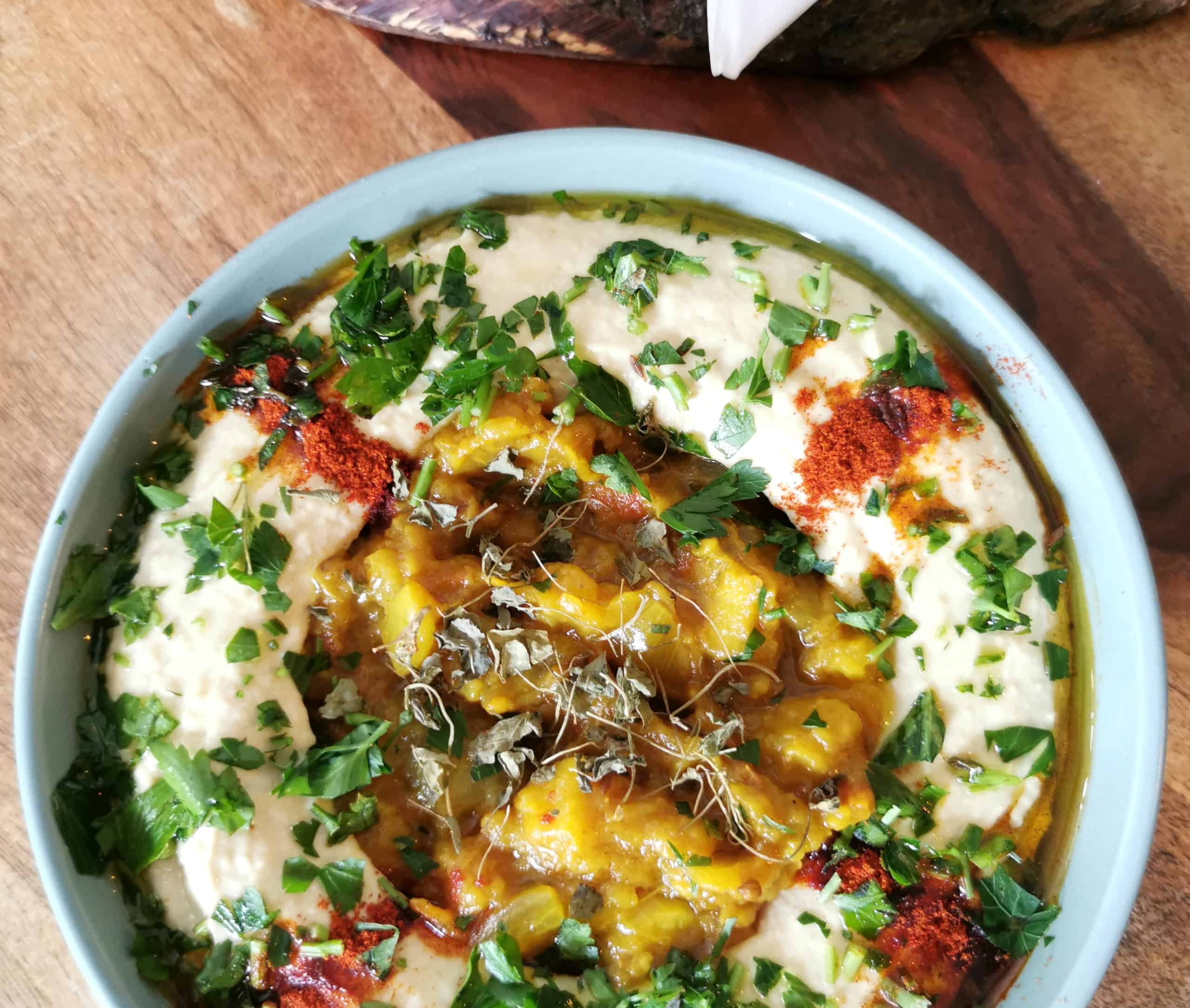 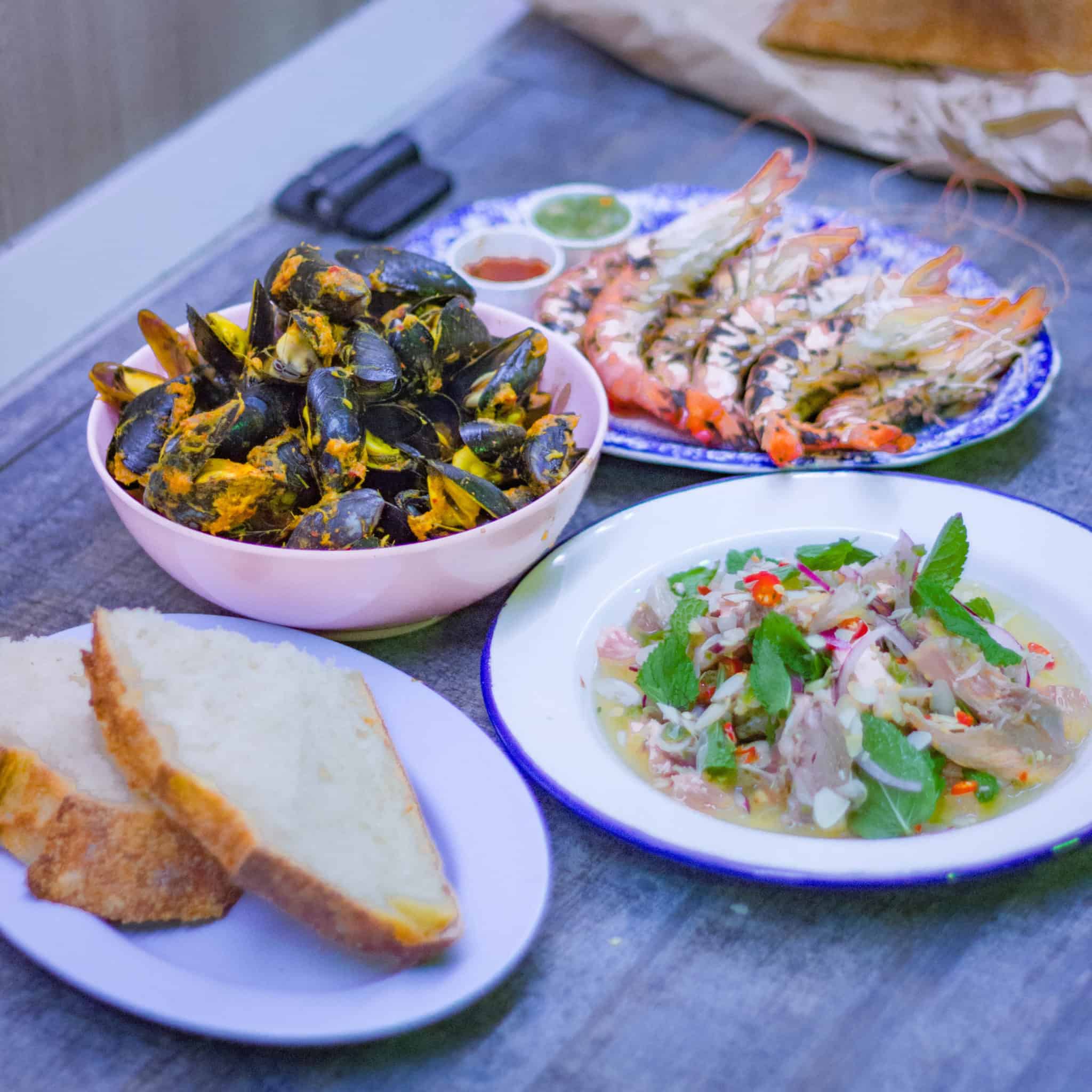