Jesöff: The Punk Beer Standing Up to Sterni

Jesöff challenges Sternburg for the title of Berlin’s punk beer. And it has the credentials to do so.

Name an Export-style beer that’s 5.2% alcohol, costs around 80cents and goes by the tagline: Das Bier mit dem Roten Stern. No, it’s not Sternburg – it’s Jesöff, a new, bargain-basement beer brand that its founders hope to see in the hands of hipsters and Handarbeiters all over Berlin very soon.

The similarities between Jesöff and Sterni are intentional. Jesöff wants to take Sterni’s market share.

Unlike Sterni, Jesöff isn’t out there to make profit – it’s a non-profit organisation. It exists solely to raise money (a projected 30,000EUR+ per year, 50 cents per crate sold) for transformative social projects and local initiatives and to prove that people can buy affordable beer without lining the pockets of huge, heartless multinational companies like Dr. Oetker.

It’s an ambitious social experiment. An exercise in intelligent branding and logistics with the dream to create an ‘echtes Community Sterni’.

Being a dedicated fan of Sternburg (and, in fact, all beers under 1EUR), I had to meet with Jesöff, and this very affront to my lifestyle, head-on.

A strange pairing, these two. On one hand, there’s Maxim, his mind visibly whirring behind his eyes, ideas and political ideologies springing from nowhere into life. Then there’s Markus, ever-present, amiable and cool. On first inspection, you’d assume that Maxim is the brains of the group, whereas Markus acts as their stable, grounded heart. But then you begin seeing that Markus is the pragmatist, the organiser and the do-er, the real-world conduit to the ethereal aspirations of Maxim, the dreamer, poet and idealist.

One thing becomes abundantly clear: Jesöff is more a political statement than a beer-drinking experience. “I want to live my life, but not on the backs of other people,” states Maxim, a graduate of politics and economics. He goes on to explain how the economy is the main branch of politics, something he wants to change, and how “economics is the spot where we can get the people’s attention, to discuss important topics, in order to make the world a better place”.

Jesöff is a platform for putting this theory into practice.

Why are Sternburg and Dr. Oetker their targets?

If you didn’t already know, Dr. Oetker (yeah, the frozen pizza guy from Bielefeld and one of Germany’s biggest conglomerates) owns Sternburg. I ask if this is the reason that Jesöff has taken aim directly at Sterni.

“It’s not Dr. Oetker in particular, it’s the principle of being a big company,” starts Maxim, ever-political. “It’s about what Sterni represents in Berlin,” interjects Markus, adding some well-needed grounding. “To drink Sterni means something for those people who drink it. It has a connection to the punk scene which it doesn’t deserve.”

What Jesöff offers is the opportunity for people to drink a very similar beer to Sternburg, for the same price, knowing each beer bought is a personal donation to the social project printed on the backside of the bottle. To them, this is real punk.

So, what makes a cheap beer cheap?

If it’s not just about the power of big companies, what makes some beers more expensive than others?

Branding, apparently. “Branding is the factor that accounts for the biggest difference in price. It alone decides why some industrial beers cost more than others. Then it’s logistics, then it’s the level of automation used (but most are heavily automated already.”

The quality of ingredients used is, surprisingly, the least influential factor in a beer’s price-point.

Where does Jesöff fit into this equation?

So, how does a small business keep their prices as low as that of a massive brewery’s?

“We were looking for a brewery who could provide us with the beer. We had a simple goal: that during blind taste-tests, at least 50% of Sterni drinkers could be fooled into thinking the beer they were drinking was Sterni (or actually preferred it to Sterni).”

Vereinsbrauerei Greiz’s beer passed the taste test (with a 70-80% success rate) and was located close enough to Berlin for Jesöff to execute the second part of their plan: logistics.

“German breweries don’t know how to sell. They don’t have distribution, they don’t deliver. They make beer – that’s all. What we’re doing is providing a brewery with a way to make more beer – to continue doing what they do – and we then handle the logistics, placing the products in front of the customers.”

And how does it taste?

It’s the big question, right? Well, coming from Vereinsbrauerei Greiz, Jesöff tastes similar to many of the countless small, regional Reinheitsgebot beers you find around Germany – and that’s not a bad thing at all.

In my opinion, Jesöff’s Export beer doesn’t taste ‘exactly’ like Sternburg at all. It has a thin initial flavour that leads to a rosewater-like hoppiness in the middle before tapering off. Sterni, on the other hand, has a much fuller, robust grain flavour.

Jesöff’s Pils was much more up my alley – easily comparable to my beloved Pilsator and countless other standard Pilsners.

Can I find Jesöff in my local Späti?

At this point, Jesöff is little more than the poster campaign you may have seen around the city, a Spätkauf in Friedrichshain which has been selling 250 bottles of the beer as a pilot and a StartNext campaign to raise money for the project. That Startnext campaign has already reached its first target of 10,000EUR. 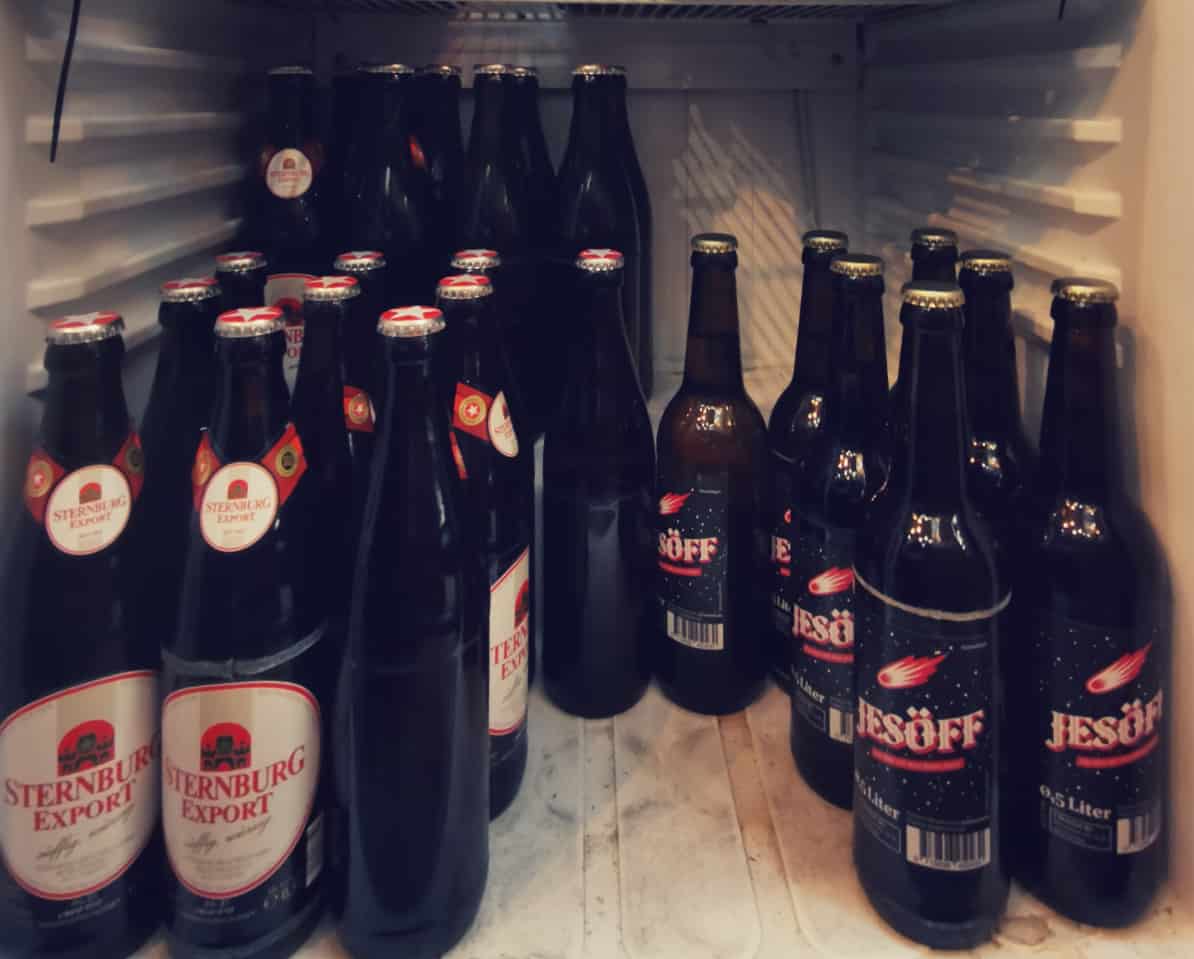 This is where you come in. You can ensure Jesöff’s place in a Späti near you by simply asking whoever owns it to order some. Jesöff is already working with beer distributor B.E.S.T. Akyol Handels GmbH, who would be happy to send a free crate to any bar, restaurant or Späti willing to try them out.

Jesöff’s plans include being stocked in 500 Spätis around Berlin in the near future.

Find out more about the guys behind Jesöff here.