A founding member of the Berlin chapter of “Dziewuchy Dziewuchom” (now “Dziewuchy Berlin”), she has spent the last five years working tirelessly to keep the flames of protest on behalf of Polish women alive by organizing demonstrations, pickets and artistic actions in solidarity with a democratic Poland. Despite Corona, personal hardship and political defeat, she never stops fighting. 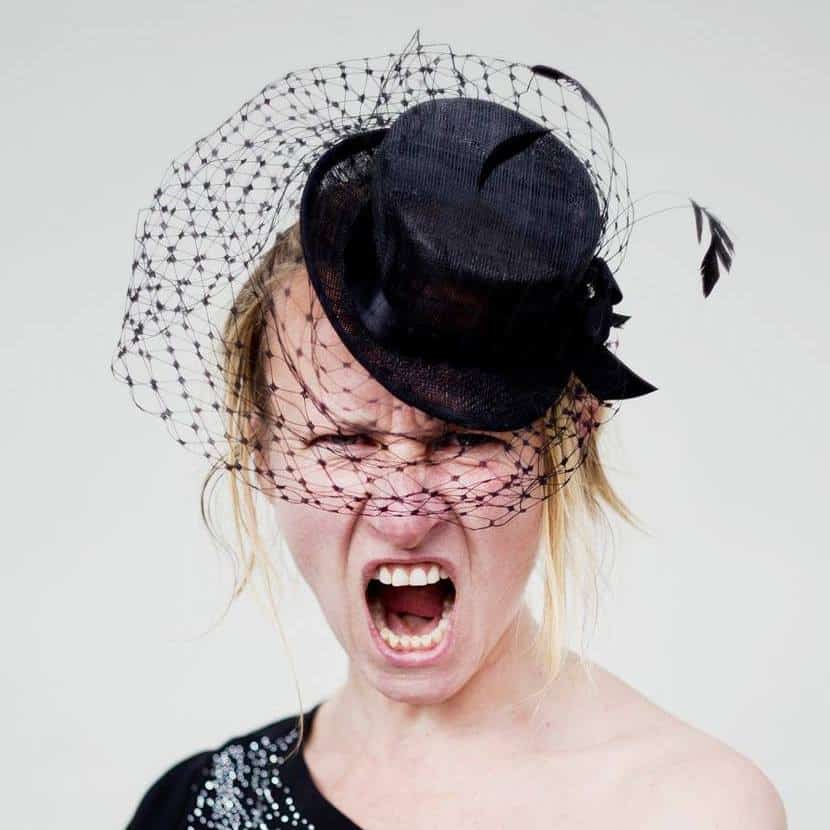 I last saw Anna Krenz in the flesh on the 1st of November last year. It was a wintry dusk when she made the Soviet Memorial in Volkspark Friedrichshain the stage for the latest in a row of demonstrations organised by Dziewuchy Berlin. It had more the feel of a vigil than a demonstration: shrouded figures on top of ladders held red flares aloft to recitations of German and Polish poetry. It was a searing image and a typical Krenz creation.

An artist and architect, Anna incorporates art into her work in raising awareness for Polish women with Dziewuchy Berlin, which she co-founded in 2016 and which has since attracted thousands of Berliners to the cause. I’ve had the pleasure of knowing Anna, thanks to her campaigning work, for nearly five years. She has since become one of my personal heroes. I recently managed to catch her for a Zoom chat and ask her some things I’d always wanted to know.

Anna, what motivated you to start Dziewuchy Berlin in the first place?

Since coming to power in December 2015, the right-wing PiS party have been dismantling democracy in Poland. They have effectively broken the separation of powers, the rule of law and the freedom of the press and, in 2016, they proposed a near-total ban on abortion.

The Polish civic movement Dziewuchy Dziewuchom, or “Gals for Gals” appeared firstly on Facebook on April 1, 2016, as a reaction to the Polish government’s plans to restrict legal abortions and within a few days, the group had gained more than 100,000 members.

I opened the Facebook group and established “Dziewuchy Berlin” on April 2nd, 2016, and have been fighting for the cause here ever since. 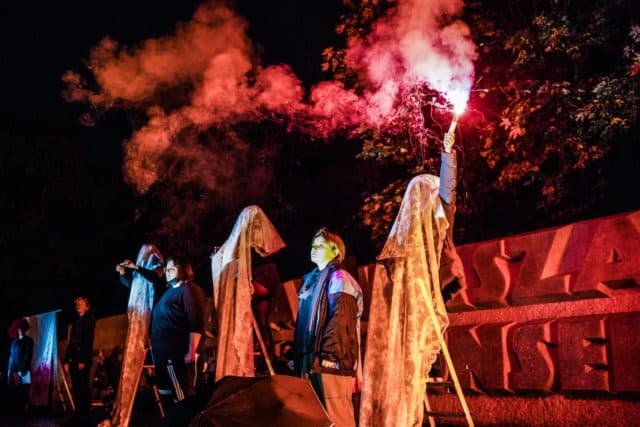 But why is there so much engagement in Berlin for the issue of women’s rights in Poland?

Because the Polish diaspora in Berlin is big… and Polish people are emotional. When bad things happen in our homeland, our hearts cry out.
And of course, Poland is Germany’s neighbouring country. We share history, a border, land, families and friends. We are close and we have more similarities than we think. Over the last few years, the feminist Polish-German solidarity friendship has been gaining strength and many German politicians (from different parties) and members of the Bundestag have also been supporting us in our struggles. So this is not only about civic solidarity, but also political. 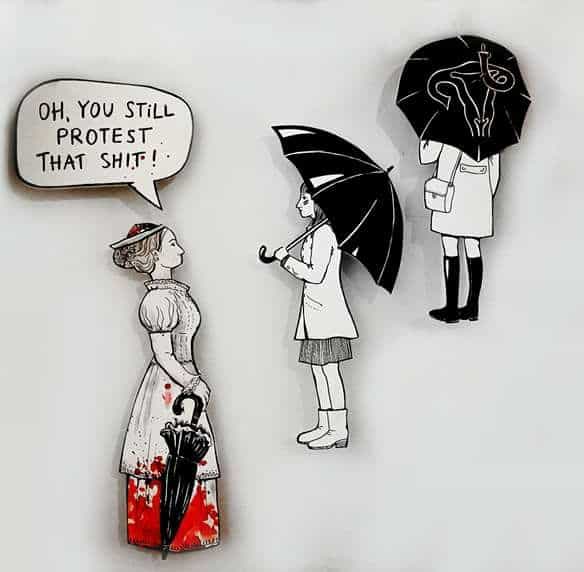 It seems that more and more people are becoming activists these days. But, you are the most dedicated activist I know. How hard is it to keep doing what you do?

Activism is not only a stage – selfies, microphones, fame and splendour. It is a lot of unpaid hard work. I don’t think everybody understands that, not even all activists themselves. A demo is a big fire where everybody is excited. But when the lights go off, the fire is out and there is just the boring stuff to do. The heat has to be kept up.

Being an activist (also in Dziewuchy) means a lot of work and not just big spectacular events. And this is the most difficult challenge. You work hard – at the cost of your family life, your child, job, health and, in the end, you get nothing. I sacrificed a lot, but I feel responsible for Dzieuwchy.

How do you try to make demonstrations different?

As an artist, I look at protests as spectacles. For me, a protest is theatre – with the stage, set design, actors, screenplay, costumes, etc.

In October 2016, I imagined the “Black Monday” spectacle on the stairs of Warschauer Brücke, as a stage. And so it was.

It was better and more powerful than I could have imagined. Over 2000 people came to our protest – all dressed in black. Polish, German, international. Everybody as pissed off as we were. This massive anger turned into a massive solidarity act. Some people still remember it, some years after. It was a milestone in Polish-German feminist relations. 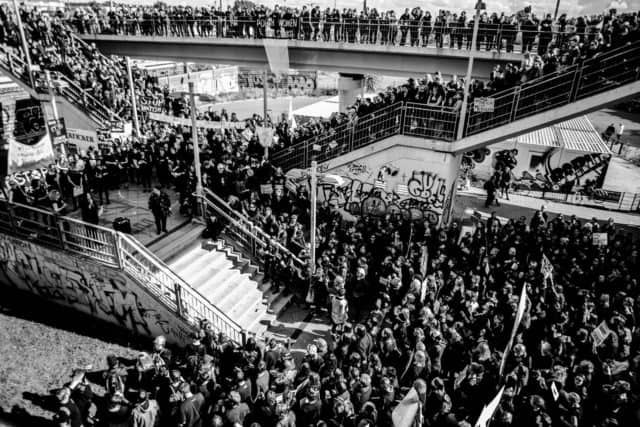 I was at that protest and I remember being struck by the strong words and imagery of blood, coat hangers and fallopian tubes (twisted into a middle fingers). Do you think it’s important to use strong words and symbols?

I am not surprised people use strong words. A beautiful example of a slogan that emerged in Berlin at one of our early demos was”Wipjerdalatsch”. This is a phonetic version of the Polish word “wypierdalać”, which means “fuck off”. I love this word. It should be included in a Polish-German dictionary.

I even saw that word sprayed on the side of a U-Bahn train!

But don’t you think some people can be put off by the word “feminism” itself?

Many years ago just, after moving to Berlin, I held an exhibition called “Polish Wife”. It was critical–dealing with the stereotypes of Polish women as wives that only cook, pray and clean. One of the art critics said, “Oh, you are a feminist!” and I got somewhat offended. I was still in the traditional Polish mindset, thinking being a feminist is something bad.

Many people still have a problem with that word, but I am somehow not surprised. The right-wing media push propaganda narratives about crazy, violent feminists (or nazifeminists), so no wonder people get scared by this word. But things are slowly changing… very slowly. I really hope that one day we can recapture this word and put it back in its correct place in the dictionary. 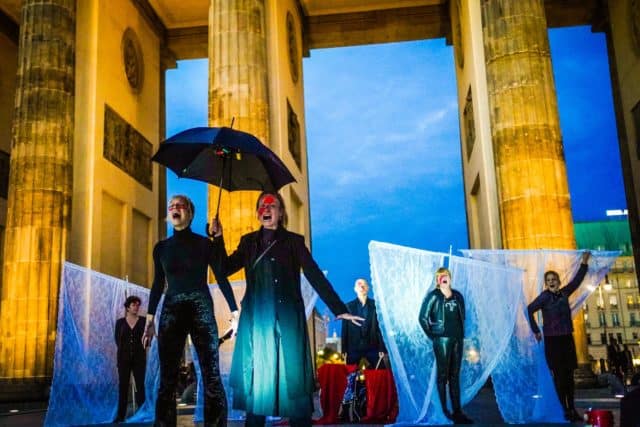 What has been your proudest achievement as part of Dziewuchy Berlin?

There have been a few breakthrough events which I truly see as achievements.

One of them was on International Women’s Day 2017. We managed to convince both initiatives -Frauenkampftag and the Alliance of Internationalist Feminists – which organise marches in Berlin every year, to actually meet in one place. 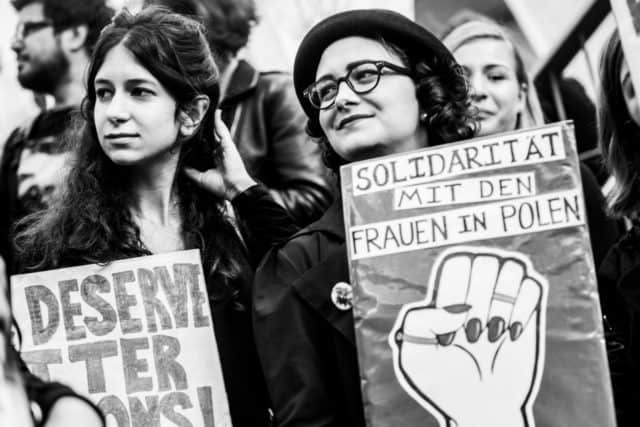 Usually, they take separate routes… as they have different priorities and political positions. Of course, feminism is diverse… and that is ok as it makes our struggle richer in content and theory. But, we thought: why not, once in a year, march together? To show the world and ourselves that we fight together, that we are one and that we are all strong and have one goal – to smash the patriarchy!

While it’s true that we choose different ways to achieve this goal, this symbolic day is to show that we are one. Women of the World, unite!

Anna will be taking her fight for women’s rights in Poland and the world over back onto the streets again today, as she does every year on the 8th of March. If you want to participate in the Dziewuchy demo, you can join them at 11am in Wedding –  details here – or find them at other demos throughout the day.